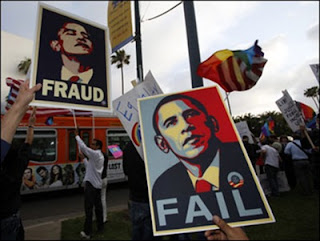 By liquidstoke @ Daily Kos
( Hat Tip Bob68 )
I gave this man $5000 in 2007 and spent many hours to canvass and phonebank for him.
I gave him another $500 in 2011 and again voted for him.
I bought the boohoo story of those meanie Republicans obatructing everything. I bought the story that we “won” with the ACA passing and broadended gay rights, but had to give up $800 billion of our hard earned money to bank crooks and let them drive away in their Bentleys to their 20 room mansions because he just couldn’t do anything about it– too big to fail. While us peons were left to fall.
They hoard and hide over $32 Trillion of wealth in the Caymans to avoid contributing to the society that helped them enrich themselves and they cry “SOCIALISM” when poor mothers and kids need help to find some modicum of GMO-made, cancer-inducing, diabetes-creating, cancer-causing suppliment food.
It’s all a grand game, an act, a nation-sized con job.
There’s no Republican or Democrats folks.
Just a giant stage on which a play of deception is played on the American people to believe we still live in a Democracy.
What it really is, is a game of Masters and Serfs.
Those “conspiracy theorists” don’t sound so crazy anymore to me. Maybe their name is not “Illuminati”, but it seems “they” are really there. In secret board rooms and meeting rooms, conjuring the strategems on how best to extract subservience and resources from the massses.
They get us all crazy about abortion, gay rights, prayer in schools, ACORN, Planned Parenthood, Britney Spears’ couchie peeks, Beyonce’s side-boobs while they steal, hoard, subvert and leech the lifeblood from the ideals this country was founded on– a land by the people, for the people. They hit the hot buttons in all of us, liberals and tea baggers alike so we can waste our precious passions and energies in angry food fights about who’s moralities are better than whom.
While they surely and clearly turn us all into sheeple…chewing on our artificially manufactured feed, inside our fenced world of corporate retail Disney worlds where they milk us and slaughter us to feed their insatiable greed for more.
This country is so sick, run by psychopaths who worship the holy god of wealth. They run or academic centers, our government, our churches, our media.  MORE
Posted by Melinda Pillsbury-Foster at 7:30 PM