How Did We Get Stuck in the Mortgage Meltdown?

Imagine an economy which is friendly to optimizing our ability to learn, live, spend time exploring the worlds wonders and know we are safe to dream.

How and when did banks and other lenders change the kind of loan they used?  For over 200 years America used an agreed ‘percentage of income’ for purchases in America routinely. Did you know that?  You should.
This is the story of Hire Purchase (HP) becoming Rigid Installment Payments (RIP), orchestrated by Isaac Singer.
In 19th century England, a Hire Purchase (HP) Agreement was first offered to entice a potential buyer into a contract for a small portable chattel debt. This is a recognized type of borrowing in the UK where you could be thrown in Debtors Prison for not paying.
With HP you don’t own the goods until you have paid in full. These were generally portable goods which could be returned.   The monthly amount due was fixed.
HP Agreements did not disguise inability to pay as refusal to pay.  It did not matter to the law, either way. The lender could repossess the goods, if you fall behind with payments, or have you incarcerated.
Issac Singer first used 1-year, 12-easy Installment Payments for tailors to pay for a $10 small purchase sewing machine to reduce the cost-impact. Singer used the word “Installment” as a ruse, as if ownership was rising as the debt was paid; the terms were opposite, modeled on the new British Hire Purchase Agreements to empty debtor prisons.  As you read the records, it is clear the motive for the Crown was to eliminate the cost of incarcerating Debtors.
The switch from paying an agreed percentage to RIP and STRIP EQUITY could not have been an accident.  It appears the displacement took place because percentage loans were using a standard which over 200 years had become custom.  So, changing the contract for small items was easy.  Then, some nasty psychopath noticed they could hide the RIP in other, larger purchase contracts.
The critical time was likely after the Federal Reserve became law and those eager to steal our substance and hard-earned savings, realized we had not noticed the change. We did not know it was no longer the local bank which was loaning us real money, just a bookkeeping entry for the FED.  Either way, the outcome has been devastating.
We documented what happened and solved the problem.  Percentage As You Earn (PAYE) with Finansurance protects everyone.  Learn about PAYE at PAYEhome.org 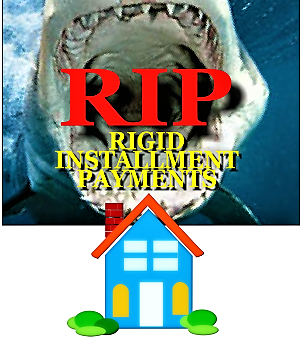 Posted by Melinda Pillsbury-Foster at 3:40 PM