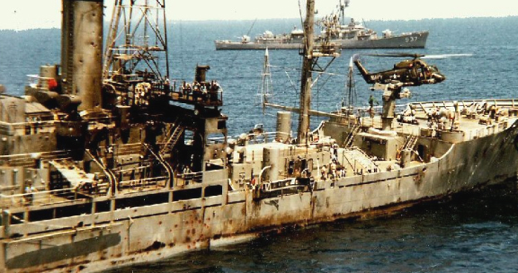 “On June 8, 1967, Israeli leaders learned they could deliberately attack a U.S. Navy ship and try to send it, together with its entire crew, to the bottom of the Mediterranean – with impunity. Israeli aircraft and torpedo boats attacked the USS Liberty, a state-of-the-art intelligence collection platform sailing in international waters off the Sinai, killing 34 of the 294 crew members and wounding more than 170.

Referring last week to the controversy of the swap of five Taliban prisoners for Sgt. Bowe Bergdahl, President Barack Obama claimed, “The U.S. has always had a pretty sacred rule: We don’t leave our men or women in uniform behind.” The only exception, he might have added, is when Israeli forces shoot them up; then mum’s the word. Mr. President, try explaining that “pretty sacred rule” to the USS Liberty survivors. I know them well enough to sense the hollow echo that Obama’s claim will leave in their ears – and in the ears of the families of those who did not survive.

The crew of the USS Liberty has been “left behind,” in a figurative as well as a physical sense. There is no way to retrieve the bodies of those washed out to sea through the large hole made by the Israeli torpedo that hit the Liberty amidships, killing 26 of the crew.

There is a way, however, to stop throwing salt in the survivors’ wounds, as every U.S. president since Lyndon Johnson has done in acquiescing to the false narrative that it was all a terrible case of mistaken identity and confusion by Israeli command and control. That salt burns – especially on anniversaries of the tragedy, raising troubling questions about the power of the Israel Lobby and the Israeli government over U.S. politicians. In apparent fear of the Israel Lobby and not wanting to offend the Israeli government, U.S. officials including the Navy have refused to come clean on what happened 47 years ago. The mainstream U.S. media has been a willing partner in this failure to face the facts and demand accountability.
MORE
Posted by Melinda Pillsbury-Foster at 8:04 AM