The agency this fall is fighting publication of a Senate report on torture while it also avoids for the most part adverse news coverage and government inquiry regarding Kennedy's death.

The CIA has sought on national security grounds major edits in the Senate probe of agency torture of terror suspects.

The agency's delaying tactics would lack credibility if not for previous cover-ups of alleged CIA crimes. This fall marks the 50th anniversary of the Warren Commission’s dubious claim that Lee Harvey Oswald acted alone to kill JFK. Serious questions remain about the agency's role in the cover-up and the killing.

The CIA-friendly Obama White House is deferring to the agency in a torture scandal that began during the Bush administration, and prompted a Senate probe beginning in 2009.

“Continued White House foot-dragging on the declassification of a much-anticipated Senate torture report is raising concerns that the administration is holding out until Republicans take over the chamber and kill the report themselves,” according to Dan Froomkin, writing “Is Obama Stalling Until Republicans Can Bury the CIA Torture Report?” for First Look / Intercept. “Senator Dianne Feinstein’s intelligence committee sent a 480-page executive summary of its extensive report on the CIA’s abuse of detainees to the White House for declassification more than six months ago.”

Froomkin’s analysis might puzzle those who believe in conventional wisdom about Obama: That he and his White House operate far to the left of the CIA-friendly Feinstein, the California Democrat shown at right who chairs the Senate Select Committee on Intelligence.

But the senator and her staffers became angry earlier this year because CIA Director John Brennan initially refused to apologize after his team was caught spying on agency staff, who represent the  elected senators who ostensibly oversee the agency. McClatchy reported the reasons in, CIA admits it broke into Senate computers; senators call for spy chief’s ouster.

Brennan, a well-connected career CIA officer who was a White House advisor during Obama's first term, is shown below at far right in an official photo of his nomination ceremony Jan. 7, 2013. Former Sen. Chuck Hagel, a Nebraska Republican was nominated at the same time to become secretary of defense, and is at the left of the president. 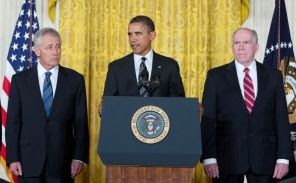 Many of the previous segments in our series provided updated research tools regarding JFK-focused books, films and archives. But the historian at some point needs to provide also conclusions, as my Cornell professor Alan Bloom taught long ago in assigning his class Friedrich Nietzsche's Use and Abuse of History.
In this instance, the torture issue is one of the better-documented of the inherently secret power struggles within the intelligence/defense communities. Another recent example is the forced resignation of last week of Hagel, a Republican, for unexplained reasons we shall illuminate in a separate column.

The torture report is particularly important. It centers on core values of United States democracy.One is the ability of elected leaders to oversee a hidden government represented by the CIA, as reported in previous segments of this series.

Moreover, rendition and torture of suspects -- often without the protections of a criminal process or prisoner-of-war status -- undermines both the morality and effectiveness of United States war-making that the CIA increasingly undertakes in covert operations. 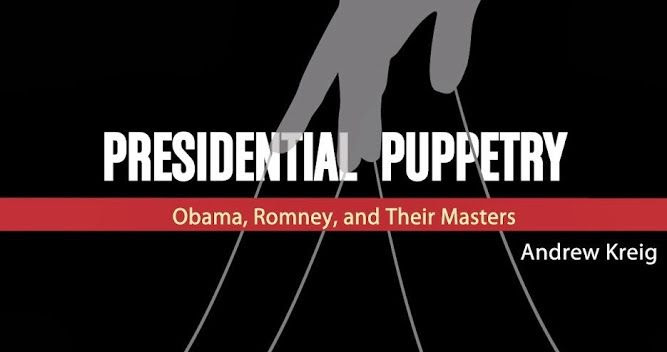 With that background, we examine three big secrets that decipher the Senate-CIA-White House impasse:
Secret number One:  Obama is a product of the intelligence community's centrist wing, but also fears it. The CIA and its allied front organizations, including the Ford Foundation when it was run by Lyndon Johnson's former National Security Advisor McGeorge Bundy, fostered the careers of both of Obama's parents and the young Obama. The future president's first job after college graduation in 1983 was with the CIA front company Business International Corp. My book Presidential Puppetry: Obama, Romney and Their Masters, documented this family background, in part by citing pioneering researchers whose findings are ignored by the mainstream media.

Second, Obama, like his White House predecessors, is undoubtedly aware that the Warren Commission’s account of the Kennedy killing was a cover-up, and that the Rev. Martin Luther King Jr.'s ostensible killer, Jame Earl Ray, was a patsy imprisoned in a set-up scenario similar to Oswald's.Our JFK Readers Guide has documented that the CIA acts at times on behalf of a “High Cabal” of private sector potentates, and has been implicated in the Warren Commission whitewash if not the killing. Government personnel who opposed JFK's policies relied on the mob, Cuban exile community and government allies on a need-to-know basis to deliver government control to the president's CIA-friendly Vice President Johnson, whom some best-selling authors now allege to have helped plan JFK's murder.

Posted by Melinda Pillsbury-Foster at 5:43 AM