April 19, 2013, A Nation Which Needs to Remember It's Heritage for Freedom 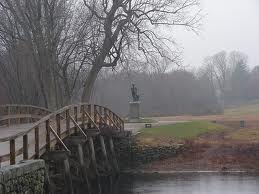 As the harsh storms of winter subside we approach the 238th anniversary of an event in American history which provides insight and direction badly needed today. On April 19, 1775 a musket was discharged, beginning a clash of arms over a small bridge standing astride the stream at Concord, Massachusetts. We have all seen the statues and, perhaps, remember the poems.

To this day no one knows who fired the shot. But the unfolding clash shocked the British Crown and set the stage for the first nation on Earth who proclaimed the principle of universal freedom in July of the next year.

This was not a government operation. These were a people who recognized the power was within them.

Perhaps the best lesson to be drawn from those events, which we have allowed to be obscured through the misted lens of time, is that this marked a moment when the people did it themselves. By so doing, they confounded the greatest power then existing on Earth.

The people had come together to determine their course thorough the Committees of Correspondence. In most towns across the colonies small groups met and discussed all of the reasons for action and their options. Today, the parallel method would be the Internet.

The British had been emboldened by their success in seizing the colonist's powder, read this 'ammunition,' held in Portsmouth, New Hampshire the year before. With their supply of munitions cut off from capture of the Fort William And Mary, the colonists were determined to be prepared. Town folk armed themselves and turned out to practice.

The British Empire had 8,000 men under arms across the globe. A far smaller number were serving the Crown in New England. That, the Crown felt, was entirely sufficient.

At the close of day, April 19, 1775, 10,000 Americans were marching towards Lexington and Concord, muskets, knives, and hammers in hand, prepared to die to win their freedom.

Women who helped their husbands, fathers, grandfathers and sons ready themselves, packing their pouches with food, filling containers with water, understood the danger they, too, faced. This was not a war fought far away, but one which would shatter families, homes and destroy their businesses and the food they relied on for winter.

They were a people who understood the value of freedom to each, as part of their nature granted, not by a king, but by God.

This video comes from The Guardian.
The father of Dzokhar and Tamerlan Tsarnaev, suspects in the Boston marathon bombing, says the pair were framed. Anzor Tsarnaev, asks police to arrest Dzokhar alive, following the death of 26-year-old Tamerlan after a shootout. The Massachusetts governor says Boston residents should stay in their homes and not answer the door, unless to a police officer


In Boston today....Swat teams and law enforcement invaded in a way the British would never have done.  One brother is dead, the other is in flight.  This is not exactly surprising, given the record of American law enforcement for violence and shooting first.

Posted by Melinda Pillsbury-Foster at 2:30 PM