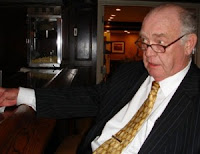 Andrew Puhanic Activist Post
Investigative journalist James P. Tucker, Jr. (Jim Tucker) passed away on Friday 26 April 2013 due to complications he suffered following an accident in his home.
Jim Tucker was known as the Bilderberg Hound and was one of a few investigative journalists who infiltrated the notorious Bilderberg Group.
Other families and organizations that Jim famously investigated were the Rockefeller Family, Council on Foreign Relations and the Trilateral Commission.
However, Jim will always be remembered as a brave and courageous journalist who took many risks in order to expose the Bilderberg Group and was solely responsible for waking up the world to the secretive enclaves of the Bilderberg Group.
The following obituary was posted by Michael Collins Piper, a regular contributor to the American Free Press and good friend of Jim Tucker.
From myself and the team at the Globalist Report, our thoughts and prayers go out to Jim’s family and friends.
Our Good Friend Jim Tucker is Gone, But He May Get the Last Laugh on David Rockefeller
By Michael Collins Piper
Jim Tucker’s only regret was probably the fact he didn’t outlive his sworn nemesis of more than a quarter of a century, international banker David Rockefeller. The colorful former editor of AMERICAN FREE PRESS—and still a continuing correspondent for this newspaper—Tucker died at a hospital in Virginia on April 26 at age 78 following complications arising from injuries received after falling down the steps in his home while in the company of his family.


Best known for having trailed the aforementioned Rockefeller and the members of such high-level power groups such as the Council on Foreign Relations, the Trilateral Commission and, most notably, the Bilderberg group, literally all over the planet for decades, the legacy of the North Carolina-born self-described “country boy” as a hard-driving investigative reporter is one that is hard to rival.

Prior to coming to work in Washington, D.C. in 1975 as managing editor of the newly-launched national weekly, The Spotlight, Tucker had been, by his own admission, a conventional journalist with a wide range of experience in the mainstream press, largely confident that the big media in America was doing its job, bringing readers the news they needed to know. He was sports editor of the The Northern Virginia Sun, managing editor of The Daily Tifton Gazette in Georgia, managing editor of The Radford (Va.) Daily News, copy editor of The Richmond (Va.) Times-Dispatch; night editor of The Washington Daily News in the nation’s capital, managing editor of The Martinsville (Va.) Bulletin, and news editor of The Akron (Ohio) Beacon Journal.
However, the day that Willis Carto, treasurer of Liberty Lobby, the populist institution that published The Spotlight, called Tucker into his office and described to Tucker the little-known history of the Bilderberg meetings, Tucker’s worldview—particularly from his perspective as a journalist—changed forever.
Despite all his years in the media, Tucker had never once heard of Bilderberg and he realized—as any real journalist should—that there was something wrong. As Tucker summarized it—all quite correctly—time and again, over the years, “If a hundred of the world’s best known sports figures or film stars were gathered at some exclusive resort behind closed doors for a private meeting, the entirety of the mass media would be on hand, clamoring for admittance and demanding to know what was going on. But when the world’s richest bankers, media barons, industrialists, members of royalty, and political leaders were meeting secretly and discussing public policy matters that impacted on the course of the world’s affairs, the establishment press never said a word.”
From 1975 to 1982, as editor of The Spotlight, Tucker supervised a wide-ranging array of journalists who trailed the Bilderberg and Trilateral gangs here and abroad. But in 1983, Tucker himself went on the road as The Spotlight’s man on the scene and scorched the Bilderbergers and Trilateralists with blistering real news coverage, from Japan to Portugal to France, England, Germany—wherever and whenever the global intriguers met, even as the rest of the American media remained mum, despite the fact that, over and over again, over the next three decades, Tucker’s pioneering investigations unveiled Bilderberg-Trilateral plans that had a direct influence on public policy affecting every man, woman and child on the face of the planet.
After the demise of The Spotlight in 2001—orchestrated by a clique of figures (including a corrupt federal judge) with known links to the Central Intelligence Agency and to Israel’s intelligence service, the Mossad—Tucker picked up his work with the newly-launched AMERICAN FREE PRESS, for which he served for several years as managing editor, and continued pressing the Bilderberg and Trilateral vultures wherever they swooped down to nest and hatch their latest plots.
Each and every year up until 2012—Tucker was there. Hustling about, grooming sources (including members of the staffs of the hotels where Bilderberg met), lending his support to other journalists who came on the scene, and generally driving the Bilderberg elite up the wall—and, literally, into the wall: On one occasion Tucker discovered a secret listening device planted in the wall of the hotel room he was occupying in an inn located close to Bilderberg’s gathering place at one of the exclusive resorts the shadowy intriguers regularly met.
In recent years—as more and more journalists worldwide became aware of the existence of the secretive Bilderberg meetings and started arriving on the scene themselves, looking for leads, Tucker became “the man to see,” when the grizzled veteran journalist—an unabashed journalist of the old school, a two-fisted drinker and unapologetic three-packs-a-day smoker—showed up to keep the hoity-toity “suits” at Bilderberg on their toes.
Tucker maintained regular contact with a number of sympathetic sources both inside and close to the Bilderberg elite, and just days before his death, he had once again cracked Bilderberg secrecy and managed to uncover the location of Bilderberg’s upcoming meeting in England—despite (as per usual) Bilderberg’s efforts to misdirect Tucker from learning their real destination.
Having slowed down considerably in recent months, Tucker had just decided not to attend this year’s gathering, passing his torch to AFP correspondent Mark Anderson, who had joined Tucker in covering a number of recent Bilderberg gatherings, but if anything is for certain it is this: the old Bilderberg Hound will be there in spirit and, given the opportunity, he might even slip David Rockefeller a “mickey.”
Tucker is survived by two sons and literally millions of friends and admirers all over the world who appreciated Jim’s wry humor and the real journalism that he represented in every sense of the word. His literary legacy not only includes many thousands of articles published in The Spotlight and AMERICAN FREE PRESS, but also his classic memoir, Jim Tucker’s Bilderberg Diary, and The Crimes of Yalta, first published in 1984 and just recently slated for republication.
This obituary was originally published on American Free Press.
Andrew Puhanic is the founder of the Globalist Report. The aim of the Globalist Report is to provide current, relevant and informative information about the Globalists and Globalist Agenda. You can contact Andrew directly by visiting the Globalist Report
Posted by Melinda Pillsbury-Foster at 5:30 PM