Adam Kokesh is a Political Prisoner 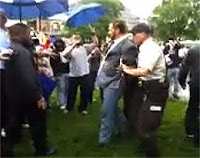 Daisy Luther Activist Post
The establishment has made no secret of the fact that they are not very impressed with Adam Kokesh’s planned Open Carry March on Washington DC this coming July 4.
But yesterday the situation devolved to a new low when Kokesh was arrested for….doing nothing.
The controversial talk-radio host of Adam Vs. the Man has been made a political prisoner.
A “political prisoner” is defined as:

A person who has been imprisoned for holding or advocating dissenting political views. source

Regardless of your personal beliefs on whether marijuana should be legalized, if you believe that freedom of speech is protected by the First Amendment to the Constitution, what happened at the May 18 “Smoke Down Prohibition” event in Philadelphia is a clear-cut violation of Kokesh’s rights. While other people there were actually breaking the law and smoking in an act of civil disobedience, Kokesh was not – he was simply speaking.
Adam Kokesh is being charged with resisting arrest…Check out the video – all I see is a man with his hands up (and no marijuana in those hands either). You don’t have to be an expert on the law to see that he went with the officers peacefully.

Does this mean that only popular opinions are protected by the Constitution? Does this mean that the Constitution is no longer in effect for those who disagree with the current laws? Or is this something more sinister? Perhaps an attempt to prevent Kokesh’s planned march on July 4 for occurring?
According to his Facebook page, which is being updated by friends, Adam Kokesh is being held in a federal jail until he can appear before a judge on Monday. And things may get worse for him – watch the first 40 seconds of this video – it is the same as the video above, but a closer shot – do you see someone’s hand at Adam’s waist? Are they planting “evidence”? Don’t be surprised if you hear he had all manner of illegal substances in his possession – think critically because the information will be presented in the mainstream to paint the picture that the PTB want you to see, and this picture will very likely be at odds with the truth.

Activism is getting a lot more dangerous. Expect to see an example made out of Adam Kokesh. The Powers That Be would like to quell the Open Carry March before it happens, and locking up the driving force for that protest is a clear cut way to do so. If we allow this to happen by doing nothing, then we are just as bad as the police who are “just following orders” who arrested him without cause and just as bad as the system that is charging him with resisting arrest despite video evidence that he did no such thing. Doing absolutely nothing is as dangerous an attack on freedom as the attacks being made by the government itself.
As a strategic move by the government, this one is a little better thought out than others because of the nature of the protest. Many conservatives that would be behind a demonstration for the Second Amendment might be offended by a demonstration in which the protesters smoke pot. You have to see through that to what this really is. It has absolutely nothing to do with the use of marijuana other than as a way to present Adam Kokesh as distasteful to those who have more conservative values. This is an effort to publicly silence those who resist and an attempt to make an example out of Kokesh to deter others from resisting.
So, what can you do about this?

The Powers That Be have taken a gamble with this arrest. The results could go one of two ways. They know that those who love freedom are basically good, moral people. None of us wants to be arrested or disappeared into the depths of a federal detainment facility. They’re counting on that to keep us quiet. Alternatively, this might just cause a groundswell of resistance.

Make their gamble backfire. Help resistance to grow exponentially by sharing information about this unconstitutional act. Keep in mind that this has trampled on the right to free speech, the right to peaceful assembly, and possibly, the right to due process. Adam Kokesh is being held as a political prisoner to teach us all a lesson and to enforce their desire that we all be peaceful sheep to be herded along. If Adam Kokesh can be arrested for doing nothing more than disagreeing with the establishment, then so can you.

Think about the many outrages against personal freedoms in past years: big things like the Presidential and Congressional assaults on the Bill of Rights, Big Brother style surveillance, and the NDAA, down to simple things like people having their vegetable gardens forcibly ripped out of their front yards or going to jail for having the audacity to harvest and use rainwater.

Daisy Luther is a freelance writer and editor. Her website, The Organic Prepper, where this article first appeared, offers information on healthy prepping, including premium nutritional choices, general wellness and non-tech solutions. You can follow Daisy on Facebook and Twitter, and you can email her at daisy@theorganicprepper.ca
Posted by Melinda Pillsbury-Foster at 6:29 AM