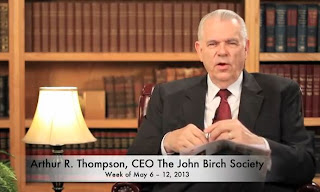 As I’ve documented on several previous occasions, JBS CEO Art Thompson is consistently inhospitable to the truth.  That trait was displayed to good advantage in a recent video commentary in which Art once again fulminated about the abiding Soviet menace.

About two minutes into the video, as Art weaves a fascinating tale of Cold War-era Soviet deviousness in which Russian submarines decanted Spetsnaz  commandoes into Sweden in order “to start disarming certain military bases.” During those incursions, he insisted, the Soviet Special Forces operators “destroyed a large amount of Sweden’s oil reserves … as a precursor to invading Sweden under Brezhnev.”

“There was a plan, a very elaborate one, to invade Sweden and another country,” Art insists, going on to explain that is he among the special, chosen few who knew of these developments because  “I got this straight from the head of the National Security Agency that that was what was going on back then.”

This is a forthright, unambiguous claim, made on the record, that the military official who presides over the most secretive intelligence agency in the US government saw fit to confide these privileged details to the CEO of the John Birch Society – or, at least, the guy who would someday hold that position.

Art didn’t say if this intelligence was provided to him by the incumbent NSA Director, General Keith B. Alexander, or one of his 14 predecessors (such as Lt. Gen. William Odom, who held that post during the 1980s). But that detail is inconsequential, given that Art’s claim is, on its face, a childish and self-exalting falsehood.

Unless Art can prove this claim, he should either retract it or own up to the fact that he told a lie.

It’s worth pointing out as well that the details of the story Art told don’t really make much sense.

Why would the Soviets sabotage Sweden’s oil facilities, since the country has never been a significant producer or exporter of oil? Currently, Sweden ranks 95th in national oil production, right below the petro-chemical juggernaut that is Bangladesh. Neighboring Norway, on the other hand, ranks 14th. Similarly, Sweden is 45th among oil-exporting nations, as compared to Norway’s fifth-place rank.

Did Art have Norway, rather than Sweden, in mind as the target of this campaign of Soviet espionage and subversion? Or is it his view that Sweden's unremarkable performance as an oil producing nation attests to the singular success of Soviet sabotage efforts?

Here’s what I suspect happened here: I think Art was describing the plot of a really silly 1980s propaganda film.

In 1987, the Swedish government produced a civil defense film called “The Premonition” that described Soviet espionage operations – which were plentiful, of course – and sketched out what I’m pretty sure was a fictional scenario in which the Soviets carried out sabotage operations in Sweden as a precursor to an invasion. By that time, Brezhnev had joined Lenin in hell, and the Soviets were beginning to downsize their empire. While Russia can be a restive and dangerous neighbor in any era, by the late 1980s its was becoming clear that neither Sweden nor anybody else had much to fear regarding the prospect of a Soviet invasion.

I think that Art most likely saw that film, or some portion of it, decades ago, and wove elements of it into his stump speech, which most likely included reference to something that had once been said by the NSA Director – and that those elements ended up being thrown together, Mad Libs-style, in Art’s recent video.

This would be entirely forgivable – if it weren’t for Art’s emphatic insistence that he had gotten this story “straight from the head of the National Security Agency.” Not from an NSA report, publication, or analysis, mind you, but “straight” from the lips, pen, or keyboard of the NSA Director himself.

As a self-replenishing source of bizarre comedy, Art Thompson is an embarrassment of riches. As someone who is the official spokesman for the John Birch Society, he’s simply an embarrassment.

Posted by Melinda Pillsbury-Foster at 8:30 AM