(and you can thank Hillary for the delay)  No joke.

A comprehensive and affordable health care plan has been available to Americans since 1993.  The reason you never heard about it is simple.  Hillary Clinton did not want a plan which provided her with no control.
Despite experts from every political perspective endorsing the plan, Hillary preferred her 396 organizational boxes, experts who would rationalize control by government, and hand her the means for enriching herself.  And maybe Bill, though he had no problem with our plan.  He had used the same Percentage As You Earn financing to get through Yale Law School. Bill himself was handed the plan by his attorney, Vernon Jordan, who had endorsed PAYE as head of the Urban League. Vernon received it from William H. Donaldson, Chairman of the New York Stock Exchange.  Donaldson liked the idea and was happy to be our courier.  Donaldson’s good friend William E. Simon, former Secretary of the Treasury, said of the plan, “This is the best thing I have ever heard of since God, Mother and Apple Pie!”  Donaldson completed his task as courier, handing it to Vernon so Bill could give it to Hillary.
Here is the short version on what happened:

12 respected experts were delighted with the plan and all of us expected to see it adopted soon.  But that did not happen.  If you are a Millennial, you likely cannot appreciate how tumultuous the years between 1992 and today were, and why we could not get around to this before.
Our lives were filled with disasters, tragedies, for instance September 11, 2001.  We faced growing suspicions about the honesty of our electoral system which proved to be all too true; Monica Lewinski; the War of the Week approach to energy and peace orchestrated by Dick Cheney, carried out while George W. Bush, the nominal President, watched with a weed-whacker in his hands.
Veterans were coming home and dying on the streets, this caused both by PTSD, the toxic effects of pollutants they were subjected to in the War Zones, and the use of Rigid Installment Payments (RIPs), foisted on America by the English House of Lords who saw it was better for ordinary people to think debtor’s prisons were a thing of the past; instead of realizing the whole country had become one.
RIPs replaced the earlier percentage of income forms for payment.
We have a solution for that problem, too.  Here is a little more information on the new and improved version of CompreHealth Care!

And the fellow who wrote the plan for CompreHealth Care is Brock d’Avignon! 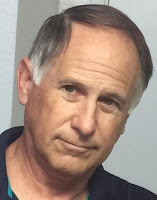 Posted by Melinda Pillsbury-Foster at 11:02 AM