Trump Has Murdered Over 40,000 Venezuelans With Sanctions 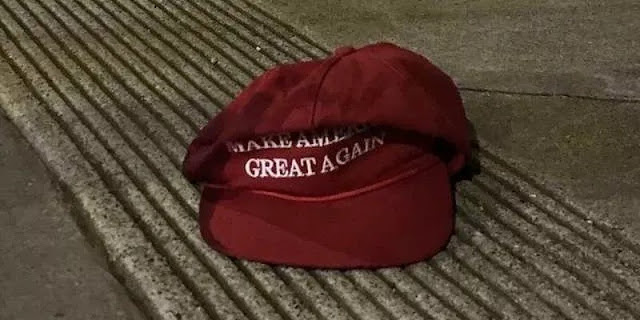 A new study from the Center for Economic and Policy Research (CEPR) has found that tens of thousands of Venezuelans have died as a direct result of Trump administration sanctions put into effect in August 2017, and that tens of thousands more are expected to die as a result of additional sanctions put into place in January of this year.
Some noteworthy points: 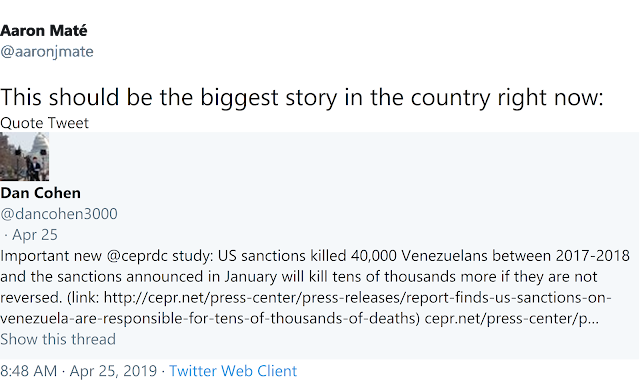 To be clear, this unforgivable atrocity rests predominantly on the shoulders of the Trump administration. It is true that Venezuela has had deep economic troubles for years due to declining oil prices and other issues, and it is true that the sanctions in question follow a longstanding agenda of previous administrations and were built on the foundation of an Obama policy declaring the Venezuelan government an “extraordinary threat to national security”. But the report is clear in its assessment that what took the nation’s economy from a state of high inflation to hyperinflation was the August 2017 sanctions, and that’s what’s been causing these high numbers of deaths which will get even worse due to the January 2019 sanctions.

To put this in perspective for Trump supporters, 40,000 is also the number of people said to have died as a result of the disastrous Obama/Clinton interventionism in Libya. And, again, that number only covers 2017 and 2018, and death tolls are predicted to accelerate this year.
This would be the same President Trump, by the way, who recently vetoed a congressional bill to end the role of the United States in facilitating Saudi Arabia’s war crimes in Yemen. Research from the Armed Conflict Location and Event Data Project indicates that up to 80,000 people had been killed in this war as of the end of last year. This number applies to deaths by military violence only, not to the other untold tens of thousands who have died of starvation and cholera as a result of Saudi Arabia’s inhuman blockades on imports and its deliberate targeting of farms, fishing boats, marketplaces, food storage sites and cholera treatment centers with airstrikes. Just for children under the age of five, the death toll due to starvation alone is believed to be over 85,000.
Is America great yet? 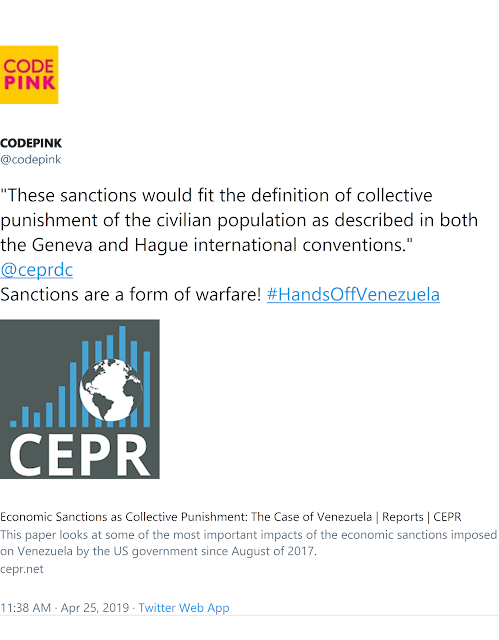 Sanctions are the only form of warfare where it’s considered perfectly acceptable and legitimate to deliberately target a nation’s civilian population with lethal force. The human corpses it creates are just as dead as the human corpses created by overt military violence, but because this form of violence happens in slow motion it’s not treated like the same kind of horrific assault as if Trump had ordered the carpet bombing of Caracas. The distinction makes no difference to the dead and no difference to their loved ones, but it makes all the difference in the world when it comes to manufacturing public consent for murderous acts of interventionism.

The way sanctions are discussed by the western political/media class, they can even get away with blaming the deaths on the government being targeted. They’ll say things like, “Maduro is starving his people by not stepping down.” That tactic would never work with other forms of lethal force. Imagine if Trump deployed a barrage of Tomahawk missiles onto the most impoverished parts of a densely populated city in Venezuela, then hearing anyone say “Well Maduro actually exploded those people, because he wouldn’t do what we told him to do.” It doesn’t work. Sanctions are a slower and more gruelling weapon of war than bombs and missiles, but they’re vastly superior when it comes to the matter of keeping the public asleep through depraved acts of mass slaughter. Which is why everyone’s yammering about Joe Biden’s presidential campaign announcement right now instead of talking about this new CEPR report.
To this day I still run into defenders of Trump’s Venezuela interventionism (easily the most obnoxious and intellectually dishonest political group I’ve ever encountered, for the record) who insist that the sanctions are laser-targeted only at Venezuela’s elites, having no impact on the suffering of the Venezuelan people. This is exactly as stupid as believing that American bombs only kill bad guys. Attacking an economy hurts the people who depend on that economy to feed themselves and their children. Sanctions are an act of war which kill civilians just as dead as any other, and this latest report helps make that a stark and undeniable reality for us all.
__________________
Everyone has my unconditional permission to republish or use any part of this work (or anything else I’ve written) in any way they like free of charge. My work is entirely reader-supported, so if you enjoyed this piece please consider sharing it around, liking me on Facebook, following my antics on Twitter, throwing some money into my hat on Patreon or Paypal, purchasing some of my sweet merchandise, buying my new book Rogue Nation: Psychonautical Adventures With Caitlin Johnstone, or my previous book Woke: A Field Guide for Utopia Preppers. The best way to get around the internet censors and make sure you see the stuff I publish is to subscribe to the mailing list for my website, which will get you an email notification for everything I publish. For more info on who I am, where I stand, and what I’m trying to do with this platform, click here.
Posted by Melinda Pillsbury-Foster at 9:09 AM