Jo vs the Volcano 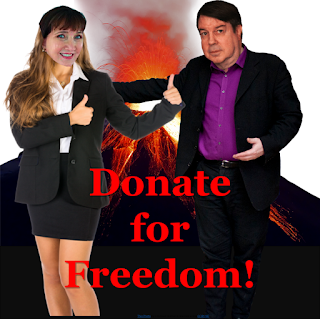 You have got to be kidding - No, I know you are not kidding.  This is what happens when political rhetoric diverges much too far from reality, becoming tragicomedy.

But I interrupted my work because I just had to respond.  The pitch, likely hastily written by Michael Emerling Cloud, Frodo, or whoever, needs a response which calls those encountering this page with a few, tiny realities.

The pitch begins – “Frodo is desperate and his mission seems nearly impossible to complete. Defeating Sauron, or the two-party system for that matter, isn’t an easy battle. Here’s a quick excerpt:

Sam: “… Folks in those stories had lots of chances in turning back only they didn’t. They kept going because they were holding onto to something.”

Frodo: “What are we holding onto, Sam?”

Sam: “That there’s some good left in this world, Mr. Frodo, and it’s worth fighting for.”

As Sam said, those committed to victory never turned back and were fighting for something bigger than themselves.”

End of Lord of the Rings quote in Pitch.

Do you feel appropriately moved by these moving quotes from a book whose characters are, fictionally, going into real danger?  Lord of the Rings is one of my favorite works of fiction, but it is fiction drawn from a different reality.  I was not moved, though I cringed a little.

Many Americans are in immediate danger today, facing wildfires which are wiping out whole towns and killing a growing number of people.  Burning to death is a horrible way to die.  My partner, Dave Lincoln and I have been following the build up toward what is happening now for five years as these same conditions were becoming obvious in Australia.  You can read Dave’s bio.  His CV is much longer.

This is another of many issues for which Jo will not be proposing a solution.  But if you are a Libertarian you would be better serving the LP if you donated to this cause and let those receiving assistance know an individual Libertarian is the one who made the donation.  Americans are desperate for real solutions and this is only one of the disasters we are facing.

“You and I are holding on to something too. We’re holding on to our Second Amendment rights, civil liberties, free markets, a foreign policy of peace, real healthcare reform, and transforming our criminal justice system.”

Jo, can you cite anything; what you, or dare I say anyone in your campaign, done to actually accomplish any of real goals or even advocate for them?  Any solutions at all?  Do you want to provide a plan you would follow in the unlikely event you are elected to the presidency?

This is starkly empty rhetoric.

“This is what we’re fighting for.”

In the absence of any discernable proof this claim, intended to extract donations, is sincere, I am entirely unmoved and find your claim, again, tragicomic.

“And yes… together we are casting the ring of power into the fire.”

Would you like to tell us what that means?  Please.

Does this mean you, the candidate, with either Spike or more likely, Michael Emerling, are going to do a Jo vs the Volcano?  Just asking.  I have known Emerling was looking for a candidate for this campaign for nearly a year.  I got a call from one of the women Craig Franklin, my former husband, Michael's best friend, uses  to fish for information.  I have shot holes in their schemes several times and they wanted my reaction to a possible Craig Franklin run for the Libertarian nomination for president.

I laughed, and told Anne Fisher I hoped he would.  That ended it.  Not long later I heard about Jo, who Emerling had recruited as the VP candidate for Harry Browne.  Harry was running not because his opinion on political action had changed from non-political but because the stream of income from his books had dried up.  So, we got the perpetual book tour.  Such fun.

Having no idea how to get the nomination, Browne called not Michael but John Hicks, who had also coached Ed Crane when he ran for the office of LP National Chair in 1974.  John is the best at convention politics.  Harry flew in and was familiarized with what he needed to know in two days for a couple of thousand dollars.

Having the facts and spending hours listening to Emerling talking to Craig, the ex-husband, made me very familiar with what to expect.  So, Michael found Jo.

Absolutely.  To back down you would have had to stand up for something first.

“Donald Trump and Joe Biden are crossing their fingers and hoping we will give up or simply concede… I refuse to do so.”

Not to tromp on your pretensions, but the evidence available indicates they have dismissed you as irrelevant.  However, Trump has sent military helicopters to harass one of our Debate Tourney candidates, Michael Landingham.  SITE  I did not believe Michael initially, as you see, but he provided the proof.

“Our fight is important and one I believe in. However, our fight for liberty requires funding and I need your help. My goal is to raise an additional $300,000 before the end of the month so we can reach millions of voters DURING the debates. Please use one of these links to donate today.”

The flaccid end of the Pitch.  Just how can they, without a single solution of any kind get any attention?  A few years ago the argument we needed to raise the flag of freedom provided a knee jerk reaction – but this is now, and the conditions are very different.  And how about some transparency?  Who will receive the generous donations which you are requesting? Not who will receive the funds and send it on to another party but who is really being paid?

Until then, it is Jo vs the Volcano.

Have a nice campaign.  Melinda

Posted by Melinda Pillsbury-Foster at 5:25 PM