COMMENT -  The following graphic was not originated for this, but what the heck. 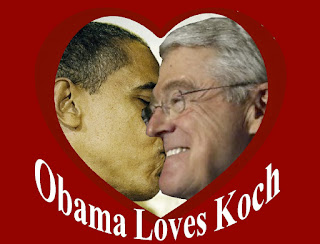 The right-wing network funded by the billionaire industrialist Koch brothers is being revamped after the 2012 elections, starting with a new nonprofit called the "Association for American Innovation" that will act as a hub for funnelling undisclosed spending towards the Kochs' political projects. With ambiguous IRS rules and a deadlocked Congress, they might get away with it.
The role for the group, according to the Huffington Post, is to serve as a financing vehicle for the Koch political network, which includes organizations like Americans for Prosperity. In some respects it appears to be playing a similar role as the Center to Protect Patient Rights, a 501(c)(4) nonprofit run by Koch operative Sean Noble that funnelled nearly $55 million to other front groups, which in turn ran ads attacking Democrats in the 2010 elections.
The Association for American Innovation will likely help the Kochs and their allies continue avoiding transparency in political spending.

The Association is organized under Section 501(c)(6) of the tax code, setting it apart from many of the dark money groups active in the 2010 and 2012 elections, like Karl Rove's Crossroads GPS or Americans for Prosperity, which are organized as 501(c)(4) "social welfare" nonprofits.
Section 501(c)(6) is reserved for business leagues like the U.S. Chamber of Commerce or trade associations like the pharmaceutical lobby PhRMA; but unlike those groups, there is little evidence the Association exists to advance the interests of any particular trade or industry.
"A (c)(6) is exactly where you'd expect captains of industry to go for political leverage out of the public view, especially if the notorious 501(c)(4) organizations are about to be more heavily scrutinized and regulated by the IRS," attorney Greg Colvin, an expert in nonprofit law, told the Center for Media and Democracy.
"Unlike a (c)(4), the organization would have no pretense of promoting the common good and general welfare of the community," Colvin said. "A 501(c)(6) is not a public interest organization. It can promote the special interests of oil and gas, pharmaceuticals, real estate developers, manufacturers, or free enterprise capitalism generally."
Donors to both 501(c)(6) "trade associations" and 501(c)(4) "social welfare" nonprofits can remain anonymous, providing a potential avenue for publicity-shy funders to spend on elections while keeping their identities secret. Super PACs must disclose all their donors, but nonprofits have no such obligation, unless a donation was specifically earmarked for a political ad.
And the law governing both 501(c)(6) and 501(c)(4) groups are the same: political intervention cannot be their primary purpose. But the IRS rules for what constitutes political intervention are relatively ambiguous and rarely enforced. And this provides an opening for the Kochs and their allies to continue influencing elections from the shadows.

Despite these limits on political intervention, several dark money nonprofits last year did little else besides spend on election-related ads. Some nonprofits even told the IRS they would not spend a dollar on political intervention.
There still has not been a public prosecution of a dark money group for violating election or tax law in the 2012 or 2010 elections, an issue that was the subject of a Senate Judiciary Subcommittee hearing in April.
"The tax rules are vague, unpredictable, and unevenly applied," Colvin testified at the hearing. "Only the most flagrant violations could be knowing, willful, or deliberate and subject to criminal prosecution."
To assess whether an ad or expenditure counts as "political intervention," the IRS uses multi-factor "issue advocacy" rules and a vague "facts and circumstances" approach. This includes enough wiggle room for dark money groups run by the Kochs or others to argue that their ads or organizing drives should count as "education" or "lobbying" rather than electoral advocacy -- preserving their nonprofit status while shielding their spending and funding from public view.
The IRS and Treasury Department could create more bright-line rules but have failed to do so.

This ambiguity in the rules governing nonprofits led to an unprecedented level of secret spending in the 2012 elections. And that has inspired calls for transparency from members of both parties, although the GOP as a whole has consistently opposed disclosure legislation. In addition to the DISCLOSE Act, which failed in recent sessions (largely because of Republican opposition), Senators Lisa Murkowski (R-AK) and Ron Wyden (D-OR) have introduced the "Follow the Money Act" to require any group that spends more than $10,000 on an election to disclose the identities of donors who give $1,000 or more.
The Kochs have lobbied against almost every proposal for greater transparency in election spending.
The fate of disclosure legislation remains unclear. But perhaps the Kochs are nonetheless anticipating greater transparency requirements with the creation of the Association for American Innovation: by a donor giving to the Association, and the Association then contributing to a dark money nonprofit like Crossroads GPS that spends on political ads, the original donor's identity is almost certain to remain secret if Crossroads GPS must disclose its donors. GPS would likely only report the Association for American Innovation contribution, allowing the original donor to keep their anonymity.
"So long as huge amounts and proportions of political campaign funds can flow through multi-purpose 501(c) entities, the task of achieving public disclosure will be almost impossible," Colvin told the Senate Subcommittee.
Another complicating issue is that the IRS has never clarified how much political intervention is too much for a nonprofit. It cannot be a "primary purpose," which could mean anywhere between 10 percent and 49 percent of the nonprofit's overall activities. It is also not clear when one nonprofit transferring funds to another counts towards their political intervention limit.
Even if a group like the Association were to specify that its transfer to another Koch group cannot be used for electoral purposes (as defined under vague IRS rules), money is fungible, so the contribution can free up more funds for the recipient's explicitly political activity. And if the Association makes a significant number of contributions to other nonprofits -- which they will likely do -- and argues the transfers do not count as "political intervention," the Association itself could devote more resources to electoral politics without this becoming its "primary purpose."

States Fight Back, but Kochs Might Evade Grasp of Attorney Generals

Despite criticism from Colvin and other experts, the IRS has failed to create more clear rules for nonprofits on how political intervention is defined and how much is too much, and Congress has failed to revise the tax code or pass disclosure legislation. This has left the door open to abuse of the tax code by players like the Kochs.
But some states have not been paralyzed by inaction.
In 2012, the Koch-connected Center to Protect Patient Rights was involved in a shell game where $11 million was shuffled between three different groups to influence two California ballot initiatives. But since November, California's elections board has been digging deep into what it calls this "campaign money laundering" effort, most recently issuing a round of subpoenas to determine who provided the original funds.
Other states are also taking action. Montana and its state courts have successfully enforced disclosure laws against a dark money group that had tried keeping its donors secret. Bipartisan legislation in Wisconsin would require greater transparency for "issue ads" that run near an election. And New York's Attorney General issued new rules to require donor disclosure by dark money groups that spend more than $10,000 in an election.
And here arises another advantage to organizing the Association for American Innovation as a (c)(6): unlike (c)(4)s, they largely will not fall under the charitable trust jurisdiction of state attorney generals.
Posted by Melinda Pillsbury-Foster at 7:05 AM