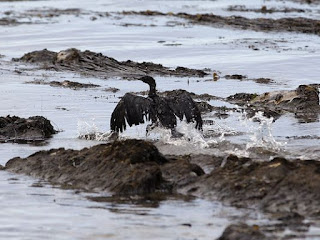 The oil pipeline that ruptured last month and polluted miles of once-pristine California coast was corroded extensively in four areas that the owner had identified for repair two weeks before the accident, according to a federal report released Wednesday.

Investigators found a 6-inch-long crack along the bottom of the section of the 24-inch-diameter underground pipe that ruptured May 19, the Pipeline and Hazardous Materials Safety Administration said. The accident spilled between 71,400 gallons and 105,000 gallons of heavy crude, much of it pouring down a storm culvert into the Pacific Ocean near Santa Barbara.

At the spot where Line 901 failed, corrosion had worn the metal down to an estimated thickness of just 1/16th of an inch — far more degradation than the owner, Houston-based Plains Pipeline, reported to the agency after the company's May 5 inspection.  MORE

Posted by Melinda Pillsbury-Foster at 2:30 AM