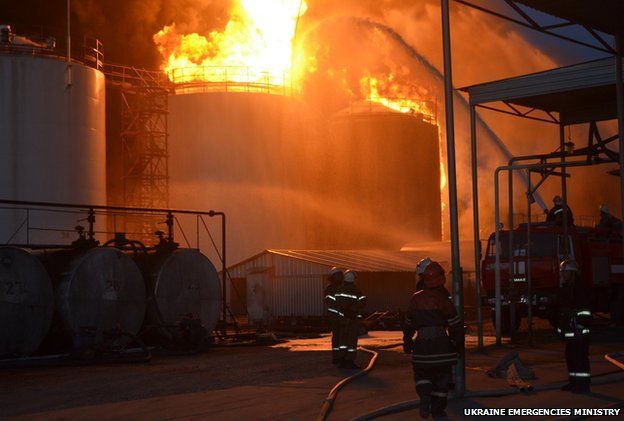 Emergency crews are battling a fire outside the Ukrainian capital, Kiev, following a huge blast at a fuel depot.

The blaze broke out on Monday evening, and one worker at the plant died.

The explosion on Tuesday morning left several firefighters reportedly injured or missing.
Three firefighters were unaccounted for and another six were taken to hospital, officials said, as the fire spread to at least 16 tanks, most of them storing petrol.

The fire at the depot, next to Hlevakha airbase and near the town of Vasylkiv, sent a huge pall of smoke over the surrounding area.
The army has been clearing a munitions storage facility, located about 50m (164ft) away, according to Oleksandr Turchynov, secretary of Ukraine's national security and defence council.

Posted by Melinda Pillsbury-Foster at 9:36 AM