"The Secret History of the Shadow Campaign That Saved the 2020 Election"  oh, irony of ironies.

Proudly Published by TIME Magazine
The Link to the original article is HERE
Let me know when they remove the link so I can publish the article, which I copied to forestall that eventuality.
My response to this outrageous crime can be read below

We should have elected Seven, the Dog

(We could have except for the MSM blackout) 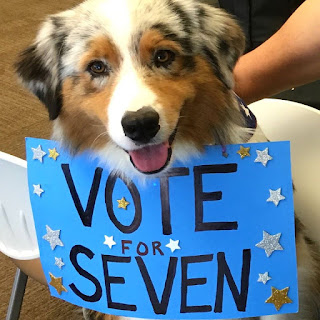 The bland inaccuracies rolled out as justification for manipulating the 2020 Presidential Election by the self-described Voter Protection Program were startling, at best.

I have despised Donald Trump since I first read an article about his use of government to steal the long-owned home of an elderly woman, her private property, to enhance the value of one of his multitude of casinos.  Eminent Domain, I had supposed, was limited to  proven needs for public improvements.  It was Donald who sent me back to look at the law on this, resulting in my rejecting there was any justifiable excuse for this.  And for a casino?

I dismissed Donald from my mind and skipped over the articles outlining his irregular marital activities.  I was, therefore, astounded at the idea he was running for president in 2016.  Surely, I reasoned, this is some kind of publicity ploy.  And so I ignored the election entirely after it proved impossible to extract any comment from Bernie Sanders on the material my partner and I sent to him about the toxic conditions in the lake near his home in Vermont.  Apparently, he was not concerned.  Bernie lost, of course and then Trump again surfaced.

People were taking him seriously as a candidate. It was one of those horrible moments when you are sure this must be a bad dream.

And then Trump won.  Children were being retained in cages at the border and Betsy DeVos, the sister of the Eric, Black Prince of Death, formerly associated with the bland and unexceptional Amway products, had clearly found very unsavory associations.

In the mean time I had realized I was not alone in my dissatisfaction with the kind of people who had inserted themselves into the hierarchy of politics.  The one characteristic they seemed to share was an avaricious appetite for money (ours) and power and was surprised to learn the present trajectory for greed and the likelihood of psychopathy was apparently building a hopeful level of frustration in my fellow Americans from all political viewpoints.

The number of individuals filing to run for President had been steadily increasing since 1992, when there had been 65 candidates.  Note for future reference you likely remember only one of those not running as a Dem. or Rep. in '92. H. Ross Perot.

The Perot Campaign shook things up, which was delightful to see.  Of course, it did not last - and it was not until 2017 when I was handed some slightly musty folders which explained what had happened in '92 and how Bill Clinton had managed to overturn a sitting president, George H. W. Bush, with a 89% popularity.

It had taken several days to read through the documents and the documents owner, one of my partners, happily answered questions when he could.  But as I dug down it became increasingly clear he had no idea why this curious event had taken place.  And more, he did not see the correlation between that event, the nomination of Dull Bob Dole as the nominee of the Republican Party in 1996 or other curious events you can find on the site.

I have occasionally been accused of being cynical, but I prefer to think of this as simply being unhampered by illusions about the character and ethics of those in politics.

The Commission for Presidential Debates was incorporated jointly by the Dems. and Reps. soon after the 1992 election.  According to the records handed over to me, now scanned and ready to be uploaded to a website, PhoneVoter.us, where I assembled the pieces of the story.

There had been plans to start the Commission for Presidential Debates earlier because the League of Women Voters had notions about asking hardball questions.  The D & R candidates wanted only softball questions.  So, after having Ross on the program a deal was cut between the Clintons and BushCo; no more independent or 3rd party candidates allowed and no more League of Women Voters.  STORY

The link at the bottom of the page leads to Haley Barbour, appointed as Chairman of the RNC and his orders no satellite or services by PhoneVoter be used.

When researching a subject I always use a time line; these can be very revealing.  I knew from a friend of mine, whose family was chummy with the Bush Family in Texas that Daddy Bush was already planning for his namesake to follow him into the presidency.  Therefore, they did not want a GOP Incumbent and allotted Bill a second term.  Bill did use satellite.  In fact, he used a full year of it, paid for the DNC.  I wonder if Bill shared with other Democratic candidates?  Anyone know?

I was startled to read in the article that previous elections had been honest.  In fact, it does not appear we have had an honest election is decades, just one reliable elite pick after another.  Not that there was any intention John McCain would win in 2008.

So the War for Oil was going well in Iraq and war went on, and on and on.  And as this continued, not surprisingly, Americans started to become restless.  There was the 2008 Meltdown and other events which caused disruptions in their lives and so every election, sometimes starting right after Election Day, more people decided, "What the heck, I'll run for president myself."

In 2016 there were 1,775 candidates but, naturally, the MSM did not mention them.  And something else was happening.  The Democratic and Republican Parties were shrinking, shrinking, shrinking.  And Americans, very unhappy with the direction politics were taking began starting new parties like a mother bunny turning out babies. 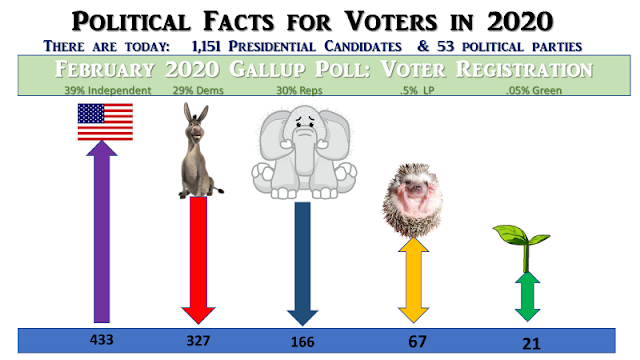 And this leads us back to the question of the curious cabal of self-anointed elites who decided Americans needed to be protected from four more years of Donald Trump and instead have Biden as president instead of one of the 1,151 candidates who were also running.

Note how the MSM drove out Howard Schultz of Starbucks, a Billionaire but not acceptable to these folks.  And Howard was not the only billionaire dissed.  So was Rocky De La Fuente, who came in second or third to Hillary in 28 state primaries in 2016.   Curiously, the MSM never mentioned him.

So, I was not surprised at the arrogance demonstrated, this is consistent with their behavior in the past.  And this has nothing to do with politics or ideology; it is a bald attempt to eliminate the control Americans should have over who they elect to office.  This is just the most recent chapter in the story.

Thomas Jefferson referred to this kind of thing as a "long train of abuses,' but you have to give these folks credit, they are far sneakier than the British were.

So, what will Americans do when they have a chance to debate the real issues?  Stop by DebateTourney.com and find out.

Posted by Melinda Pillsbury-Foster at 7:45 PM No comments: