COMMENT - So, we know Saddam had nothing to do with 9/11, there were not Weapons of Mass Destruction, and Saddam offered to leave, if paid, in November 2002.   If you want the truth, wait until the 'private contractors' start leaking.  We know they will, because, One, they realize they are expendable, Two, they are mercenaries, and Three, the first one to talk can make even more money as a celebrity.

Yesterday, Infowars.com posted images of what they referred to as Navy SEALs in civilian field gear lurking at the finish line of the Boston Marathon where two bombs killed 3 and injured hundreds.
It turns out these men were Blackwater-like private military contractors from Craft International, according to investigative journalist Anthony Gucciardi of StoryLeak.com.
The two mercenaries were wearing typical field gear of khaki tactical pants, combat boots, black coats, and carrying suspicious backpacks. But what really gives them away as Craft International mercs is the hat with the Punisher-like symbol on it.


There has been much discussion over the two individuals fitted with earpieces and military-esque gear spotted at the Boston Marathon, but as it turns out they may likely be employees of the Blackwater-style private military/security firm Craft International.

Craft International, modeled after Blackwater as an advanced private military training organization, was founded by the late ex-Navy SEAL Sniper Chris Kyle.
Either these serious-looking fellows are big fans of military contractors and want to emulate them, or they're the real deal. In either case, they seem very suspicious to be at the scene of the crime clearly dressed in civilian mission gear. 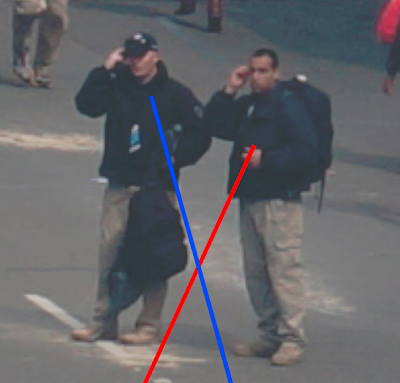 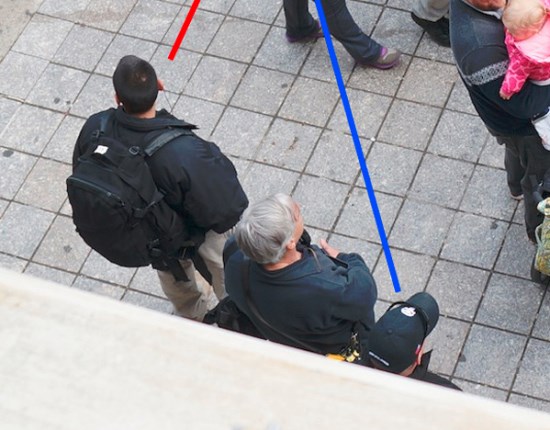 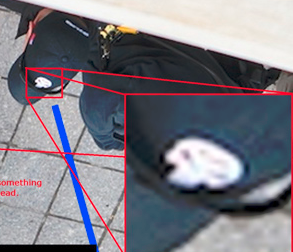 Craft describes the reasoning behind the skull symbol as their logo:

The story behind the Craft Skull logo combines several meaningful pieces of Chris Kyle's life and service to this great nation but mainly honors his fallen teammates. As part of SEAL Team 3, Chris and his fellow teammates painted similar skulls on their gear in order to strike fear in the enemy. The crosshair symbolizes his time spent on a sniper rifle and is also in the form of a templar cross to symbolize his faith. Lastly, the crosshair is on the right eye to honor SO2 Ryan Job USN (SEAL), who was critically wounded when he was shot in the right eye while on deployment to Iraq in 2006.

Following the successful rescue mission by Navy SEALs of freighter Captain Richard Phillips on Easter morning, 2009, Ryan Job was asked by a local reporter if he thought using Navy SEALs against Somali pirates was overkill. His response was, "despite what your mamma told you, violence does solve problems." Ryan Job died in September of that year following complications during reconstructive surgery.

The Craft Skull is a daily reminder to us all the sacrifices brave warriors have made and what it takes to triumph over evil. 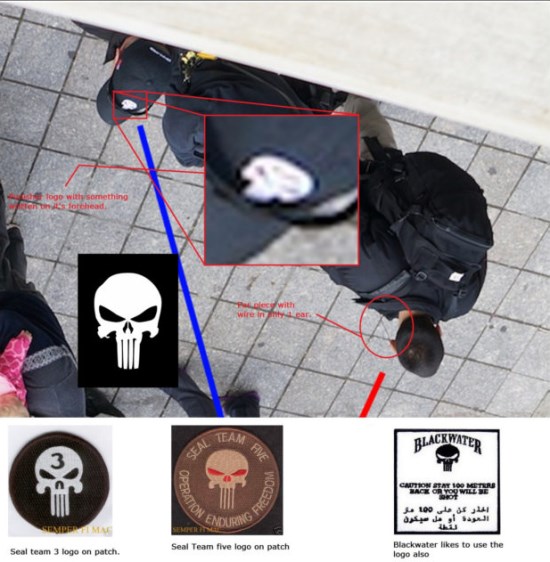 Additionally, a third figure dressed identically is seen crossing the threshold of the finish line holding what appears to be some kind of remote control.


Will someone in the media have the courage to ask the authorities if these clearly suspicious characters are being considered as official suspects?

Posted by Melinda Pillsbury-Foster at 8:32 AM