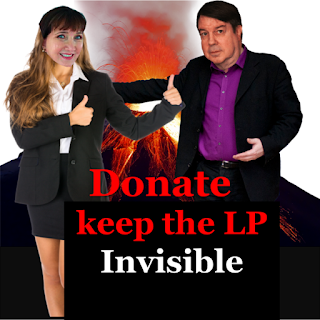 You are a volunteer, you say. Volunteers know exactly what they are told. The media director, Richard Fields told me decisions were being made on these issues which were 'Above his pay grade".

Note he was the Director for Media, generally a pivotal position for decision making in a normal campaign. Gary Johnson ran two organizations to raise money, and raising money was all that he did. The campaign pocketed much of it after election day, so that is not a great example. Did you think Our America Imitative accomplished anything but raising $20M in funds for Gary and his campaign manager?

This is the last time we will offer the LP nationally any services.  The only way to win in politics is by using Interactive 2-Way Mass Audience Participation TV.  We are now reaching out to others who understand the gravity of what Americans face today.  We have followed the downward spiral for ten years, since 2008.  What we face is a hyperinflation which will reduce the US to a third world country.

Our consultants include a Collateral Merchant Banker who reports to us on how the final extraction of wealth is proceeding.  The only solution is a delivery system to provide a soft-landing for Americans and that must be entirely free market. Our plan was endorsed by very different people than you work with in the LP  See  https://www.payehome.org/experts

Interactive 2-Way Mass Audience Participation TV is the Delivery System which will allow Americans to convert their loans using Safety Net Financing and so avoid becoming homeless.  Want projections?  16 Million Americans will be homeless, living in cars and with jobs disappearing.  Think Hyperinflation on the 2008 model but dozens of times worse.

We have the backing of 250 TV tech companies, all of whom are anti-censorship and who live the values the LP merely emotes.  See FreedomTVNetworks.com   Our launching network is Women Leading Interactive TV Network   See WomenLeading.info.

Lots of ploys have been used to increase what is actually paid to staff. I began recording what I was seeing, as I knew most of these people in the early years of the LP. I knew about why Harry ran in 1996, and I know who trained him to get the nomination. John Hix charged Harry a couple of thousand dollars for the training needed to convert the LP Presidential Campaign into the Perpetual Book Tour. In case you did not know, Harry ran because he was accustomed to a posh life-style predicated on book sales and his sales were in the toilet.

In 1980, we had been promised at a meeting I had been especially asked to attend as Southern California LP Vice Chair, that cross their little hearts, Ed Crane would not be involved in the campaign. Then that changed to "he would only handle communications". But afterward, it was obvious that the title did not matter, he was in charge. I had this confirmed to me in the elevator after the Alternative '80 event the September before the 1980 election, held that year at the Century City Hotel. Charles Koch dressed down Ed Crane as I listened with delight. Koch was obviously exasperated saying, "How did you manage to lose money on this event? It was a fundraiser and you lost $250,000!

The Kochs were engaged in a blood-letting at the time over control of Koch Industries, which they won in a squeaker.

Crane was very unhappy I was present as he knew I already understood what he was doing. He had told Gail Lightfoot, if you do not know who Gail is, google her, in 1977 at the National Convention, again in an elevator remark, he was, "Going to DC to get rich!" Crane pulled down $500,000 a year as a salary at CATO. Notice the absence of the free market at CATO. The Kochs did not fire him until they realized the liability for his sexually inappropriate behavior in the office on their time, was becoming very public.

After that, I covered every campaign for president. I strongly suspect you are not at the 'paygrade' who knows the facts or makes decisions and were, as a loyal follower, and or credulous shill, picked to make your statement.

Michael Emerling recruited Jo to run as VP and that happened sometime between 1990 when his wife, Vicky, a good friend of mine, left him for good and sufficient reasons, and 1994.  Emerling and a motley collection of folks who viewed the LP as a cash cow handled the action for the 1996 Browne Campaign.

Note that Jo did not share with delegates she would be working full time while running for office. That would have changed the outcome of the nomination. She promised Emerling was not involved. I have learned not to believe anything until I see the documentation. And given the ploy with the Fake Debate of October 29 not long ago, Jo has no more credibility with me than I would accord to Ed Crane.

I am writing a book covering each campaign, including the MacBride Campaign in 1976. I was asked to write Roger's biography. If you do not know who Roger was, look it up.  Roger was the producer of Little House on the Prairie, for which he owned the rights inherited from his adopted grandmother, Rose Wilder Lane.  His campaign plane in 1976 was called NO FORCE ONE.  Roger paid for it and for most of his own campaign.

Now, note that Dan Fishman conned me into believing there would be an Interactive 2-Way Mass Audience Participation component to the ‘Jo’ Campaign.

You write PR for the Jo Campaign - https://independentpoliticalreport.com/2020/10/the-jorgensen-insider-issue-06/

Now, please connect your brain.  Why is it that today the LP still does not use TV, not even 1-Way, passive TV?  They could have had a network, which we offered them along with showing them how to use satellite uplink trucks to take the message home to tens of millions Americans.  Our partners in the distribution industries, for instance satellite, also want to know.

If any Libertarian reading this had to ask themselves why the LP continues to live in the past for media, now they have the beginning of the answer.  The LP does not want to win.

Posted by Melinda Pillsbury-Foster at 11:17 AM