People from coast to coast in the USA, and from one side of the world to the other, are becoming ill after exposure to the radiofrequency radiation emitted by Wireless Smart Meters. Attached are the results of two surveys of the symptoms being reported.


The first survey comes from the United States and includes 318 adults, from 28 states from California to New York, and addresses wireless utility meters that are principally Wireless Smart Meters. The second survey comes from the other side of the world, Victoria, Australia, and includes 92 adults and children, and addresses Wireless Smart Meters exclusively. Altogether, 410 adults and children are included. Both surveys report new or worsened symptoms after the installation of wireless utility meters in a given individual’s environment.


The attached two graphs show the percentage of individuals in each survey who experienced each symptom. The two surveys group the symptoms into somewhat different clusters, but these clusters are similar enough to enable comparison between the surveys. Of the top seven clusters of symptoms in both surveys, six clusters are similar in both description and order of occurrence: (1) sleep disruption; (2) headaches; (3) ringing or buzzing in the ears;
(4) fatigue; (5) loss of concentration, memory, and learning ability; and (6) disorientation,
dizziness, and loss of balance. Most individuals in the surveys developed multiple symptoms.


A symptom, of course, is something that can be sensed by an individual, and thus can serve as a warning. Unfortunately, many health effects caused by radiofrequency radiation have no early symptoms and thus give no warning. These health effects become evident only after significant harm has been done. Examples are DNA damage, cancer, and reproduction effects.


1 Ronald M. Powell is a retired career U.S. Government scientist. He holds a Ph.D. in Applied Physics from Harvard University. During his Government career, he worked for the Executive Office of the President, the National Science Foundation, and the National Institute of Standards and Technology.


OBJECTIVES
Executive Summary by Ed Halteman, Ph.D.
Wireless Utility Meter Safety Impacts
 To investigate reported public health and safety complaints about wireless utility meters.
 To evaluate the impacts on health and safety due to wireless utility meters.
 To determine whether further study is warranted.
METHODS
 Survey was designed by the EMF Safety Network (Network).
 The survey was circulated online through various social media outlets including Network’s email list, Facebook, and the California EMF Safety Coalition (a discussion group).
 The survey was also posted on Network’s website: www.emfsafetynetwork.org where visitors were invited to take the survey.
 443 responses were received from 7/13/2011 through 9/2/2011. (318 of the 443 answered the health questions that formed the basis for the bar chart on symptoms. RMPowell)
 Network commissioned Survey Design and Analysis (SDA) to provide this report of the survey findings.
RESPONDENT MAKEUP
 93% are over 40 years old and 43% are over 60 years old.
 73% are women.
 78% are from California.
 68% have Pacific Gas and Electric (PG&E) as their utility provider.
 49% are EMF Sensitive.
 41% have had a new wireless meter installed in their home; of these . . .
o 56% have had it installed for at least six months
o 89% have electric meters, 53% gas meters and 10% water meters
o 35% saw an increase in their utility bill
o 26% have experienced some type of interference
o 8% experienced burned out appliances or damaged electronics including TV, stereo, computer,
refrigerator and other.
 76% indicated they have wireless utility meters installed in their neighborhood, town or city.
o 44% near their home
o 36% in town
TOP HEALTH ISSUES SINCE NEW METERS INSTALLED
 Sleep problems (mentioned by 49%)
 Stress, anxiety and irritability (43%)
 Headaches (40%) (Intentionally listed at 41% on symptoms bar graph, rounded up from 40.9%. RMPowell)
 Ringing in the ears (38%)
 Heart problems (26%)
UTILITY and PUBLIC UTILITY COMMISSION INTERACTIONS (Title inserted by RMPowell.)
 40% (111 people) of those having wireless meters in their homes or community have complained to their utility provider.
o 96% of these people were either “Unsatisfied” or “Very Unsatisfied” with the handling of their complaint.
 32% (88 people) complained to the utilities commission.
o 96% of these people were either “Unsatisfied” or “Very Unsatisfied” with the handling of their complaint
 94% of respondents want to retain or restore their analog meters and 92% of these respondents do not think
they should have to pay any additional money.
STATISTICAL TESTING SHOWS THE TOP HEALTH SYMPTOMS ARE POSITIVELY ASSOCIATED WITH
 EMF Sensitivity
 Wireless meters installed in the home 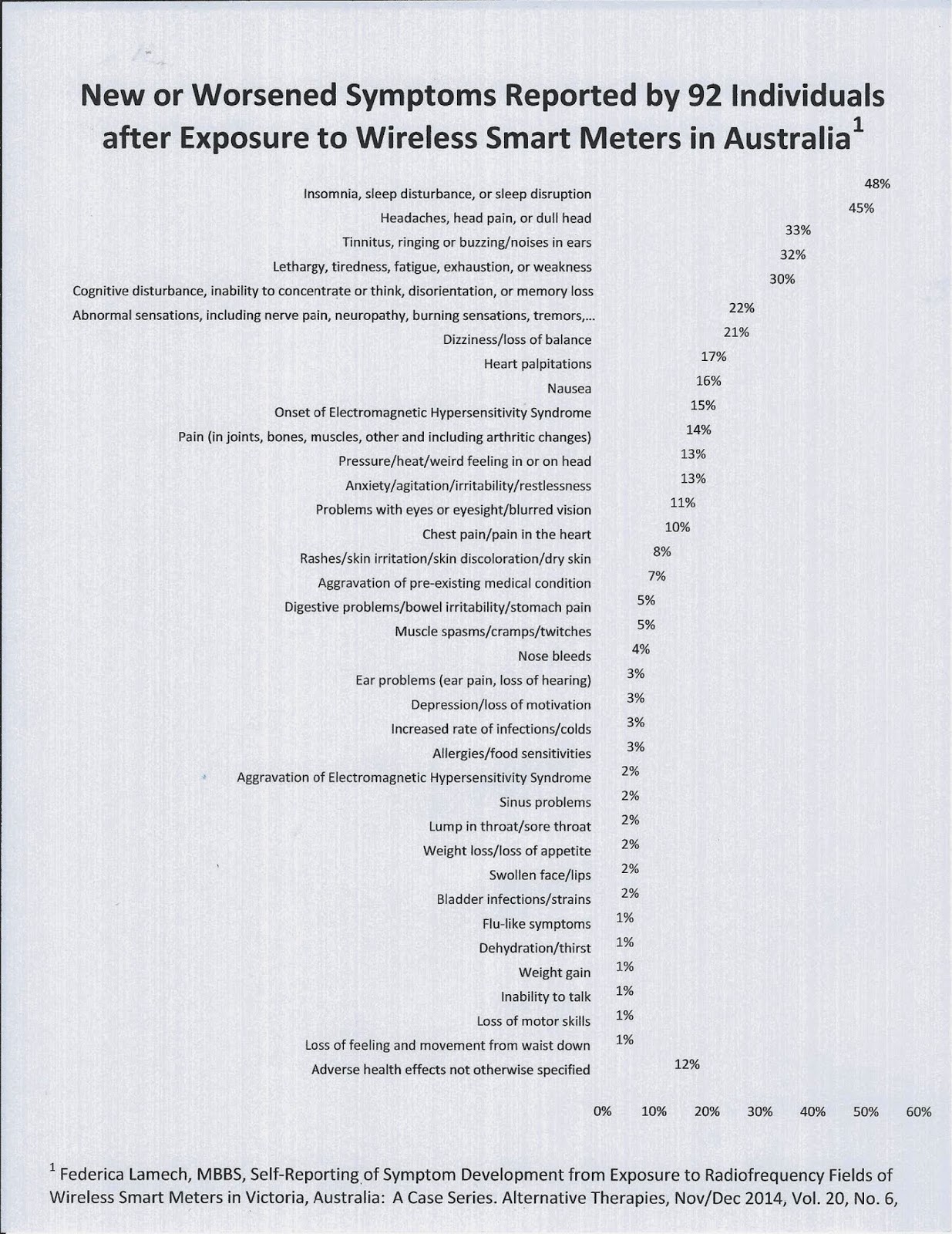 Self-reporting of symptom development from exposure to radiofrequency fields of wireless smart meters in Victoria, Australia: a case series.

Lamech F. Abstract CONTEXT:
In 2006, the government in the state of Victoria, Australia, mandated the rollout of smart meters in Victoria, which effectively removed a whole population's ability to avoid exposure to human-made high-frequency nonionizing radiation. This issue appears to constitute an unprecedented public health challenge for Victoria. By August 2013, 142 people had reported adverse health effects from wireless smart meters by submitting information on an Australian public Web site using its health and legal registers.

The study evaluated the information in the registers to determine the types of symptoms that Victorian residents were developing from exposure to wireless smart meters.

In this case series, the registers' managers eliminated those cases that did not clearly identify the people providing information by name, surname, postal address, and/or e-mail to make sure that they were genuine registrants. Then they obtained consent from participants to have their deidentified data used to compile the data for the case series. The author later removed any individual from outside of Victoria.

The author used her medical experience and judgment to group symptoms into clinically relevant clusters (eg, pain in the head was grouped with headache, tinnitus was grouped with ringing in the ears). The author stayed quite close to the wording used in the original entries. She then calculated total numbers and percentages for each symptom cluster. Percentages were rounded to the nearest whole number.

The most frequently reported symptoms from exposure to smart meters were (1) insomnia, (2) headaches, (3) tinnitus, (4) fatigue, (5) cognitive disturbances, (6) dysesthesias (abnormal sensation), and (7) dizziness. The effects of these symptoms on people's lives were significant.

Review of some key studies, both recent and old (1971), reveals that the participants' symptoms were the same as those reported by people exposed to radiofrequency fields emitted by devices other than smart meters. Interestingly, the vast majority of Victorian cases did not state that they had been sufferers of electromagnetic hypersensitivity syndrome (EHS) prior to exposure to the wireless meters, which points to the possibility that smart meters may have unique characteristics that lower people's threshold for symptom development.