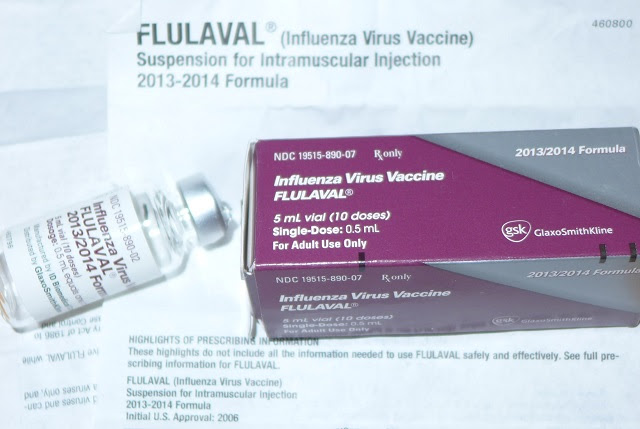 (NaturalNews) Mercury tests conducted on vaccines at the Natural News Forensic Food Lab have revealed a shockingly high level of toxic mercury in an influenza vaccine (flu shot) made by GlaxoSmithKline (lot #9H2GX). Tests conducted via ICP-MS document mercury in the Flulaval vaccine at a shocking 51 parts per million, or over 25,000 times higher than the maximum contaminant level of inorganic mercury in drinking water set by the EPA.(1)

The tests were conducted via ICP-MS using a 4-point mercury calibration curve for accuracy. Even then, the extremely high level of mercury found in this flu shot was higher than anything we've ever tested, including tuna and ocean fish which are known for high mercury contamination.

In fact, the concentration of mercury found in this GSK flu shot was 100 times higher than the highest level of mercury we've ever tested in contaminated fish. And yet vaccines are injected directly into the body, making them many times more toxic than anything ingested orally. As my previous research into foods has already documented, mercury consumed orally is easily blocked by eating common foods like strawberries or peanut butter, both of which bind with and capture about 90% of dietary mercury.

Here are the actual results of what we found in the influenza vaccine from GSK (lot #9H2GX):

All tests were conducted via calibrated, high-end ICP-MS instrumentation as shown in these lab videos.

Doctors, pharmacists and mainstream media continue to lie about mercury in vaccines

As you take in the scientifically-validated fact that mercury exists at very high concentrations in flu vaccines, keep in mind that most doctors, pharmacists and members of the mainstream media continue to stage an elaborate lie that claims mercury has "already been removed from vaccines."

Never mind the fact that the use of mercury is admitted right on the package containing the vaccine vial. And now, Natural News has scientifically confirmed the mercury content of flu vaccines using high-end laboratory instrumentation. The existence of high mercury in flu shots is irrefutable.

Anyone who claims mercury has been removed from all vaccines is either wildly ignorant or willfully lying. And anyone who would knowingly allow themselves to be injected with mercury is probably already a victim of the kind of brain damage well known to be caused by mercury.

Shockingly, the package insert for this flu shot readily admits the vaccine has never been subjected to scientific clinical trials:

"There have been no controlled trials adequately demonstrating a decrease in influenza disease after vaccination with Flulaval," the package insert claims in tiny text (that no one reads).

This is printed right on the insert, yet no one in the mainstream media will ever report this astonishing admission. This statement, all by itself, is a confession that flu shot marketing is a fraud.

Across the board, flu shots are heavily propagandized and promoted with the implication that they have zero risks while offering 100% protection. No one in the mainstream media ever questions this claim even though the package insert openly admits the claim is complete hokum and has never been subjected to scientific scrutiny.

No evidence of safety or effectiveness in pregnant women

But that's not all the insert admits. It also says:

"Safety and effectiveness of Flulaval have not been established in pregnant women, nursing mothers or children."

Who needs scientific proof when you've got the full propaganda of the media and the government to back you up? Anyone who dares question the scientific validity of flu shot safety for pregnant women is immediately attacked as being an opponent of all vaccines.

Apparently, the only requirement to be accepted by the vaccine community is to believe in medical fairy tales while abandoning all critical thinking and scientific skepticism. In the vaccine industry, genuine science is simply not allowed. No wonder two former Merck virologists filed a False Claims Act with the federal government, accusing the company of knowingly fabricating its vaccine efficacy data to trick the FDA.

Never proven safe or effective in children, either

Flu shots are heavily promoted for children, right alongside mumps and measles vaccines. But it turns out flu shots are never scientifically tested for safety or efficacy in children.

Check out what the insert for this vaccine directly admits:

"Safety and effectiveness of Flulaval in pediatric patients have not been established."

It's right there in black and white... an open admission. Yet flu shots are aggressively marketed to parents and children as if they were Tic-Tacs. The real beauty of the entire vaccine industry scam is that no scientific evidence is required! You don't have to have any proof, all you have to do is believe in vaccines as a matter of faith.

Do flu shots cause cancer? The honest, scientific answer is that these shots are never tested for that. As the insert readily admits:

"Flulaval has not been evaluated for carcinogenic or mutagenic potential, or for impairment of fertility."

Believe it or not, the Flulaval vaccine also warns that no one should be given this shot if they've already received another flu shot at some previous time:

"Do not administer Flulaval to anyone... following previous administration of any influenza vaccine."

And yet, amazingly, people are encouraged to get flu shots year after year, even though the package insert directly warns against anyone taking a series of influenza vaccines.

The same insert that admits this vaccine has never been proven safe in children or pregnant women also openly admits that it contains neurotoxic chemicals.

Per the insert, each dose of Flulaval contains up to 25 mcg of formaldehyde (a neurotoxin) and up to 50 mcg of sodium deoxycholate.

This is on top of the 25 mcg of mercury you'll get in every dose. And remember, this is mercury that's injected directly into your body, so you absorb 100% of this mercury (unlike mercury you eat, where most of it sticks to food fibers and is transported out of your body).

Ever wonder what all these toxic chemicals and heavy metals cause in humans? Flu shots vaccines, it turns out, are already known to cause a huge number of devastating health effects.

Predictably, there is a massive disinfo campaign across the mainstream media, Wikipedia, medical journals and government propaganda agencies (CDC, FDA, etc.) to pretend that flu shots have no risks whatsoever. Yet the insert that comes with the vaccine openly admits the flu shot has been linked with a long, frightening list of serious adverse effects. As this Flulaval insert says (see photo below):

"In addition to reports in clinical trials, the following adverse events have been identified during postapproval use of Flulaval...

Here's a photo of this section of the package insert, complete with the GlaxoSmithKline toll-free phone number: 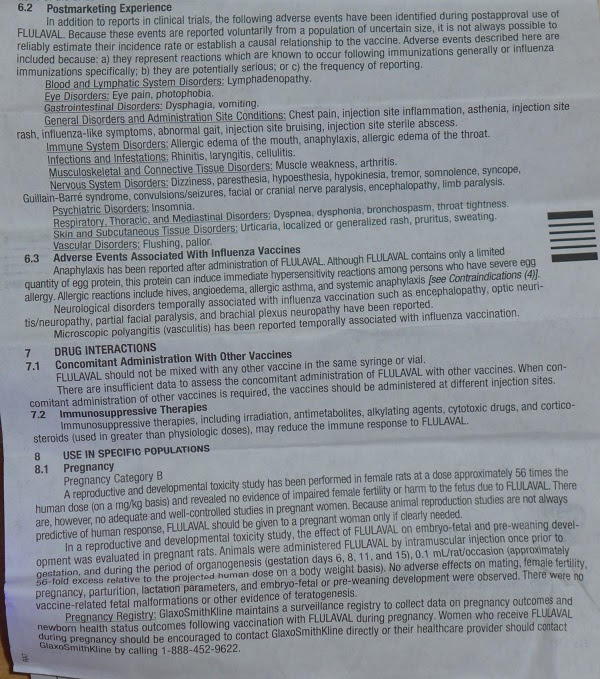 If you take flu shots, you are being poisoned by quacks

The upshot of all this is that flu shots utterly lack any scientific evidence of safety of efficacy. We don't know if they work at all, in other words, and neither does the vaccine manufacturer. Neither do the doctors or medical staff who administer them. Flu vaccines are injected into people purely as a matter of blind faith in the very same companies that have already been convicted of felony crimes.

GlaxoSmithKline, for example, not only manufacturers this Flulaval vaccine... the company also committed multiple felony crimes and got caught bribing doctors, ultimately agreeing to pay a multi-billion-dollar criminal settlement with the U.S. Department of Justice.

Trusting a flu shot made by a corporation of felons is a lot like trusting the purity of heroin you buy from a street dealer. Both flu shots and street heroin have at least one thing in common, by the way: neither has ever been tested for safety.

We also know that flu shots contain neurotoxic chemicals and heavy metals in alarming concentrations. This is irrefutable scientific fact. We also know that there is no "safe" form of mercury just like there is no safe form of heroin -- all forms of mercury are highly toxic when injected into the body (ethyl, methyl, organic, inorganic).

The only people who argue with this are those who are already mercury poisoned and thus incapable of rational thought. Mercury damages brain function, you see, which is exactly what causes some people to be tricked into thinking vaccines are safe and effective.

Technically, you'd have to be stupid to believe such a thing, as the vaccine insert directly tells you precisely the opposite.

Share this story with everyone who needs to know the truth about flu vaccines. This message needs to get out. Every fact stated in this article is 100% true and verified. The quotes from the Flulaval package insert are on-the-record statements from GlaxoSmithKline.

And for the record, I am not an opponent of the theory of vaccination. What I'm against is the continued use of toxic heavy metals and chemicals in vaccines. I'm also opposed to the wildly fraudulent marketing of vaccines. If any other product were marketed with the same lies and deceptions as vaccines, they would be immediately charged with fraud and misrepresentation by the FTC. But somehow when the vaccine industry commits routine fraud, everybody pretends it isn't happening.

Even with all the marketing fraud taking place, if the vaccine manufacturers would stop poisoning the population with vaccine additives (by removing mercury, formaldehyde and other chemicals from their products), nearly all opposition to vaccines would rapidly disappear.

Sources for this story include:
(1) http://water.epa.gov/drink/contaminants/basi...
(2) http://vaccines.naturalnews.com
Posted by Melinda Pillsbury-Foster at 1:39 AM