Against Forgetting: "The Phoenix Program" and the Awakening of Historical Memory 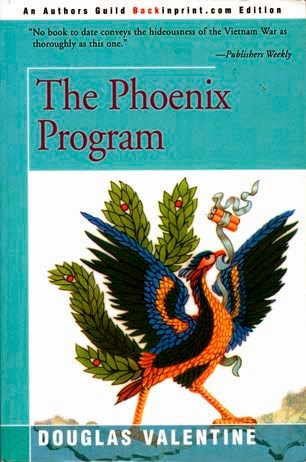 The republication of Douglas Valentine's The Phoenix Program as the first installment in a series of repressed, forgotten books by Open Road Media offers the opportunity to observe the continuity between the CIA's secret war against civilians in Vietnam and our own "Homeland Security" apparatus.

Douglas Valentine's The Phoenix Program is the first installment in a series of repressed, forgotten books that have recently been republished by Open Road Media in their "Forbidden Bookshelf" series. The Phoenix program was the CIA's secret war on the political (civilian) infrastructure of the Viet Cong with the ultimate goal of "pacifying" dissent against the unimaginably corrupt South Vietnam government. "Pacifying" included torture, indefinite detention and assassination. It is also worth noting that The Phoenix Program was the first repressed book to be showcased in the series. The Phoenix program was not only responsible for horrific crimes against the Vietnamese people, but the program was replicated in US counterinsurgency campaigns in both El Salvador and Iraq. And of most significance, as Valentine states in his new introduction, is the fact that the Phoenix program became a "template" not only for counterinsurgency campaigns in the Third World thereafter, but also for the "Homeland Security Apparatus" the American people are living under today.

This Phoenix Program is a rare work of scholarship indeed. Over the course of his research, Valentine secured over 100 in-depth interviews with Phoenix participants. He developed a rapport with his interviewees and was able to elicit from them how the Phoenix program operated organizationally, and gained unique insight into how the CIA thinks in regard to its "operational targets." The ability to have the level of detachment necessary to successfully conduct research about a subject so controversial is unusual to say the least. The Phoenix Program stands alongside the best that social science research has to offer. And as any "organic intellectual" (1) would do, Valentine has made publicly available many of his interviews so people can learn for themselves, "how the CIA thinks." It is also worth noting that in the course of conducting his research, Valentine was harassed by the CIA and received threats.

Valentine presents his research findings in a dispassionate tone, allowing the interviewees to describe in lengthy excerpts how the Phoenix program was developed out of the previous counterinsurgency programs in Vietnam that had been in place since the Americans took over from the French in 1954. For one who doesn't have deep background in the history of the Vietnam War, or military intelligence programs in general, reading through the first part of the book can be daunting. However, it is well worth the effort because as one develops an understanding of the various programs that the Phoenix program drew together - the Province Interrogation Centers (PIC), Intelligence Operations and Coordination Center (IOCC), the Census Grievance program, the Provincial Reconnaissance Units, among others - one develops an understanding of what it takes to control the political environment of a colonized people.  MORE
Posted by Melinda Pillsbury-Foster at 7:06 PM