Ebola vaccine to be manufactured by criminal drug company with felony record; rushed to market with near-zero safety testing 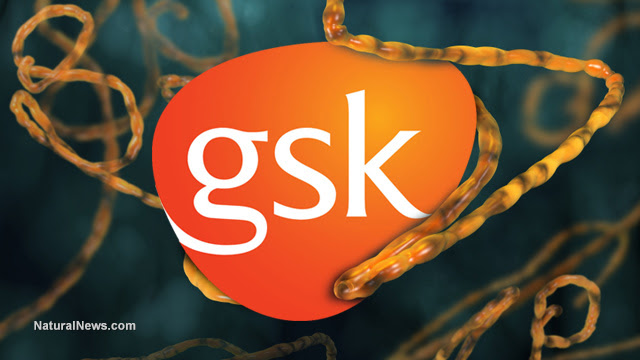 (NaturalNews) While the world of conventional medicine lines up to profit from the Ebola panic, there is no mention anywhere in the mainstream media of the criminal corporation behind the Ebola vaccine.

GlaxoSmithKline, now being celebrated by the pro-pharma press, is the same company that also has a proven criminal record of bribing physicians and knowingly distributing misleading information about the safety of their drug products.

Just two years ago, GSK plead guilty to felony crimes in the United States and was forced to pay an historical $3 billion fine for committing those crimes. After paying the fine, GSK was then exempted from normal rules regarding criminal enterprise, allowing it to continue conducting business with the federal government.

It goes on to explain, "GSK agreed to plead guilty to a three-count criminal information, including two counts of introducing misbranded drugs, Paxil and Wellbutrin, into interstate commerce and one count of failing to report safety data about the drug Avandia to the Food and Drug Administration (FDA)."

A roughly nine-year federal investigation has exposed GSK's rampant abuse of the law by illegally marketing drugs, forging drug safety data, bribing doctors to promote dangerous and expensive drugs, ripping off Medicare and Medicaid, and lying about the effectiveness and safety of drugs. And all this deception has generated tens of billions of dollars in profits for GSK over the years, while thousands of patients who used the drug products involved have suffered horrific side effects and even death.

Now this same company that admitted committing multiple felony crimes is going to lead the development of the Ebola vaccine.

"A clinical trial of an experimental vaccine against the deadly Ebola virus is set to start shortly, according to British drugmaker GlaxoSmithKline, which is co-developing the product with U.S. scientists."

Vaccine to be "rushed through" with very little safety testing

We also know that the vaccine will not be tested for anything other than short-term side effects. This is all part of the "rush to market" for Big Pharma to profit from Ebola as quickly as possible.

A company spokeswoman said on Sunday that the trial should get underway "later this year", while GSK's partner the U.S. National Institute of Allergy and Infectious Diseases (NIAID) said in a statement on its website it would start "as early as fall 2014", implying a potential September launch of testing.

A headline in the Daily Mail declares "World Health Organisation says vaccine could be 'rushed through' for 2015." (2)

That same story goes on to report, "the WHO said a potential vaccine for the Ebola virus is being tested on humans and could be ready for widespread use by early 2015."

Doing the math here, if the Ebola vaccine clinical trials start in September of 2014 and the vaccine is manufactured and distributed to the public by "early 2015," this leaves virtually zero time for observing vaccine side effects.

Manufacturing the vaccine in large quantities, after all, takes many months. If this vaccine is to be available to the public in early 2015, they will have to start manufacturing it as early as October 2014, roughly just one month after the vaccine trials begin.

This was all set up by design to make sure vaccine manufacturers could enjoy record profits while having zero liability for producing faulty products that harm children and adults. This is the reason why mercury is still used in flu vaccines which are injected into children -- a fact which I have scientifically proven in the Natural News Forensic Food Labs using ICP-MS instrumentation.

This total immunity means there is no incentive for adequate safety testing of an Ebola vaccine. The company has the same liability (zero) whether they test the vaccine or not. Their goal is to SELL the vaccine, not to make sure it's safe and effective. Time spent on conducting rigorous clinical trials with long-term observations simply isn't part of the "Sell! Sell! Sell!" business plan of today's vaccine manufacturers. Their current business slogan? "Every pandemic is an opportunity for profit." And with blanket immunity from all product liability, who needs safety testing?

Here's additional information you need to know about vaccine fraud, originally published in this article on Natural News:

According to two Merck scientists who filed a False Claims Act complaint in 2010 -- a complaint which has just now been unsealed -- vaccine manufacturer Merck knowingly falsified its mumps vaccine test data, spiked blood samples with animal antibodies, sold a vaccine that actually promoted mumps and measles outbreaks, and ripped off governments and consumers who bought the vaccine thinking it was "95% effective."

According to Stephen Krahling and Joan Wlochowski, both former Merck virologists, the Merck company engaged in all the following behavior:

• In order to do this, Merck spiked the blood test with animal antibodies in order to artificially inflate the appearance of immune system antibodies. As reported in CourthouseNews.com:

Merck also added animal antibodies to blood samples to achieve more favorable test results, though it knew that the human immune system would never produce such antibodies, and that the antibodies created a laboratory testing scenario that "did not in any way correspond to, correlate with, or represent real life ... virus neutralization in vaccinated people," according to the complaint.

• Merck then used the falsified trial results to swindle the U.S. government out of "hundreds of millions of dollars for a vaccine that does not provide adequate immunization."

• Merck's vaccine fraud has actually contributed to the continuation of mumps across America, causing more children to become infected with mumps.

• The Merck vaccine fraud has been going on since the late 1990's, say the Merck virologists.

• Testing of Merck's vaccine was never done against "real-world" mumps viruses in the wild. Instead, test results were simply falsified to achieve the desired outcome.

• This entire fraud took place "with the knowledge, authority and approval of Merck's senior management."

• Merck scientists "witnessed firsthand the improper testing and data falsification in which Merck engaged to artificially inflate the vaccine's efficacy findings," according to court documents.