COMMENT - Don't miss the photos of the removal of the pipe and the infamous culvert. 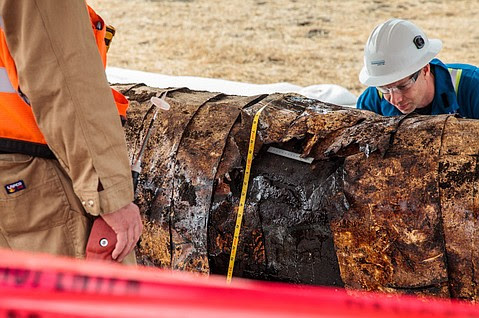 Bruce Reitherman
The location of the rupture was inspected and photographed by a number of Plains and agency personnel. (May 28, 2015)

Last week, every Santa Barbara resident received a postcard from Plains All American Pipeline CEO Greg L. Armstrong expressing his regrets at the “accidental release” of oil off the coast of Refugio two weeks ago. Since then, the oil spill has dominated any news coverage emanating out of Santa Barbara County and has become the focus of intense discussion among political-activist classes and elected officials.

Lost in the hub-bub has been any actual photograph of the ruptured pipeline itself, a small point perhaps, but one that’s nagged at The Independent newsroom since May 19. No photos would be made available, we were told, because the rupture remained the subject of an ongoing investigation. Criminal charges, we were also told, might possibly be filed.

Somehow, in our collective imaginations, we could not conjure a credible scenario in which the release of such photos could possibly compromise any investigation. Fortunately, the hyperventilation was put to rest this week with the release of these photos — at the request of The Santa Barbara Independent — by Santa Barbara County Planning and Development director Glenn Russell.
MORE
Posted by Melinda Pillsbury-Foster at 5:57 AM