Slandering others to protect your own lies and other various ugly acts should not be tolerated.  The way to handle these situations is with transparency.  I learned publishing the truth is necessary and always do so when I am slandered.  If you have any questions, just ask. 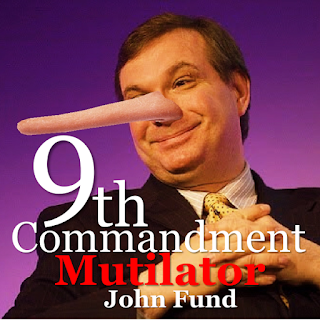 The 9th Commandment forbids this and condemns those who slander in absolute terms.  You do not have to be religious to understand why causing this kind of damage to someone else is wrong.   I thought long and hard before sitting down to write this statement and provide proof.  John Fund has slandered me for years.  Why?  Because I called him on his lies.

This is the story and the recording made by my estranged daughter, Morgan, in late September of 1999, a few months after she had aborted his child.  I knew nothing about their relationship and would not have cared if I had.  You will see why.

On March 22, 1998 my eldest son, Arthur E. Foster shot himself through the palate, attempting suicide. He had spent the day with his biological father, Ron Kellett Foster, who had ceded his parental rights to my new husband, Craig Franklin, on June 21, 1989.

Craig named all of my children as his children and heirs for all purposes five days later in his will on June 26, 1989.

Arthur had suffered a Traumatic Brain Injury in a motorcycle accident the previous year on September 27, 1997.  Less than a month before I had finished warding off the IRS, this caused by Craig’s having violated our agreement made before our wedding on June 21, 1987 that he file his taxes and remain compliant because failing to do so renders all joint property vulnerable.  Craig had insisted we hold property jointly.

Craig lied to me when he said he had brought his taxes up to date before we married.  He showed me the returns made out by my tax preparer, Doug Thorburn.  He signed these in my presence. But he hid them at work instead of mailing them.  I discovered this in January 1997 when he was hospitalized with adult onset diabetes and I began gathering our financial records to file the returns he had failed to file for over ten years after our marriage.  Yes, we were being garnisheed.  Craig also lied about this and the company for which he worked, Green Hills Software, Inc. (GHS) was covering for him.

I solved the problem.  By April we were receiving refunds from both the IRS and the State Franchise Tax Board of California, eventually a total of about $250,000.  By September 1, 1997, our finances were secured, thanks to my efforts.

You're Not Paranoid – The IRS is out to get you.

Back to John Fund.  Morgan and Fund went to bed together for the first time at an Objectivist Conference in New York on October 26, 1998.  Morgan moved to NY in January to be closer to Fund.  During that time Fund impregnated her.

I knew nothing about this directly.  I had stopped talking to Morgan when I realized she had lied to me to persuade me to take Arthur off life support in the aftermath of his suicide attempt.  I would not know for four years it was Craig who had persuaded him life was not worth living after his Traumatic Brain Injury the previous September.  Craig also paid Morgan $10,000 to persuade me to turn off life support to her brother.  Craig wanted Arthur dead. I learned about the payment through the financial discovery from the divorce several months later.  Morgan had told me she needed a heart transplant.  She had no such problem.

I would have known nothing about her relationship with Fund, which began six months later in NY, if my younger daughter, Ayn had not, skeptical of this being true, in early 1999. Morgan lived near her in Los Angeles. I dismissed the possibility and then thought Fund should be warned about Morgan and called Fund, who I had known for 20 years.  I did not know Morgan was then pregnant by Fund.

My call to John was brief.  I asked if he was in a relationship with Morgan.  John immediately denied this, saying he had fed her cat for her when she went back to Los Angeles for a few days, as she lived near him in Jersey City. He added that he was in a long-term relationship and would probably be marrying a women economist in NY.  Relieved to hear this, I wished him well and rang off seeing no need to warn him Morgan was not to be trusted.

Coincidently, this was in mid-March.  Morgan’s abortion had taken place on March 8, 1999.

When Morgan called me in late September 1999 to tell me she was in a relationship with Fund I did not believe her. Morgan had lost all credibility with me.  During that call Morgan put me on hold to take another call, saying just, “Hold on!”

For a while I did.  Then, I tried to call her back.  Those beeps are me.

The recording is now known as The Weasel Search Tape.  You will hear two liars trying to manipulate each other.  If you prefer, you can read the transcript of the call which appeared in John Connolly’s article about John Fund, “Sex, Lies, and the Tape”.  John did not want me to know about his relationship with Morgan, Morgan continued to lie.  I never knew she had been pregnant until she told me on our phone call.  But I was outraged because John had lied to me, too.

Connolly’s article was originally to run in TALK Magazine.  Fund paid his attorney to intimidate them into dropping it, which is why it first ran on Weaselsearch, now defunct.

People should not lie. This includes both John and Morgan.  And no one should slander others to protect their own lies, as is standard practice for both John Fund and Morgan.

I thought we were friends and in this rather disgusting way learned this was not true.

When John refused to answer my calls or respond to my emails, I faxed him,  I knew perfectly well the WSJ had a central receiving point for faxes and knew this would result in his calling me so we could have an honest conversation.  This did not, work. John just kept lying, and he is lying to you now.   John cannot tell the truth.

I’m not the only one who has realized this. Read about the real John Fund HERE.  You cannot trust him.

Posted by Melinda Pillsbury-Foster at 12:09 AM