By Susan Duclos
In the video below, Glenn Greenwald and his life partner David Miranda both speak out on Miranda being detained for nine hours at London’s Heathrow, supposedly justified by “anti-terror laws,” but in reality because Greenwald has been publishing reports on the NSA spying that came from whistleblower Edward Snowden.
Greenwald says he will not be silenced at this clear intimidation tactic, he will continue to publish these leaks and he will be even more aggressive after the the harassment of Miranda.
At the 54 second mark of the video below, Brazil’s Foreign Minister, Antonio Patriota, has some strong language for the powers that be in the UK, calling Miranda’s detention “unjustified.”
“Yesterday we sent a message that stated very clearly the position of the Brazilian government. We consider it unjustified, this nine-hour detainment, under the basis of the law that is applied to suspects with a possible involvement in terrorism. We hope this does not happen again and today I will speak with William Hague of the United Kingdom to communicate this message,” Patriota said.
By detaining Miranda using anti-terror laws, what the UK has just done, on behalf of the U.S., has officially turned reporters, who are supposed to keep the government accountable, into terror suspects for doing their jobs.
Worse even, it sends the message that they will go after their families if they do that job. 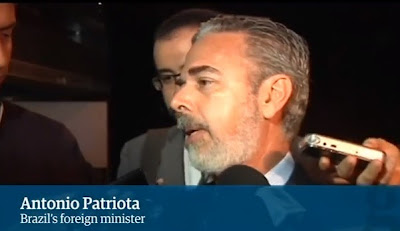 Source: http://wwwwakeupamericans-spree.blogspot.com/2013/08/reporters-are-now-officially-terror.html
Posted by Melinda Pillsbury-Foster at 9:43 AM