Your mortgage documents are fake! 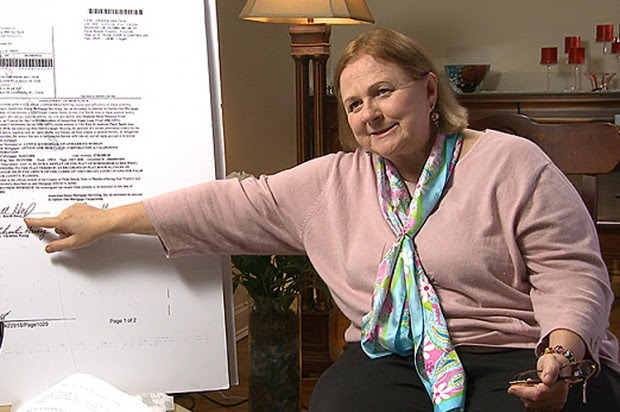 Lynn Szymoniak (Credit: CBS News/60 MInutes)
If you know about foreclosure fraud, the mass fabrication of mortgage documents in state courts by banks attempting to foreclose on homeowners, you may have one nagging question: Why did banks have to resort to this illegal scheme? Was it just cheaper to mock up the documents than to provide the real ones? Did banks figure they simply had enough power over regulators, politicians and the courts to get away with it? (They were probably right about that one.)
A newly unsealed lawsuit, which banks settled in 2012 for $95 million, actually offers a different reason, providing a key answer to one of the persistent riddles of the financial crisis and its aftermath. The lawsuit states that banks resorted to fake documents because they could not legally establish true ownership of the loans when trying to foreclose.
This reality, which banks did not contest but instead settled out of court, means that tens of millions of mortgages in America still lack a legitimate chain of ownership, with implications far into the future. And if Congress, supported by the Obama Administration, goes back to the same housing finance system, with the same corrupt private entities who broke the nation’s private property system back in business packaging mortgages, then shame on all of us.
The 2011 lawsuit was filed in U.S. District Court in both North and South Carolina, by a white-collar fraud specialist named Lynn Szymoniak, on behalf of the federal government, seventeen states and three cities. Twenty-eight banks, mortgage servicers and document processing companies are named in the lawsuit, including mega-banks like JPMorgan Chase, Wells Fargo, Citi and Bank of America.
Szymoniak, who fell into foreclosure herself in 2009, researched her own mortgage documents and found massive fraud (for example, one document claimed that Deutsche Bank, listed as the owner of her mortgage, acquired ownership in October 2008, four months after they first filed for foreclosure). She eventually examined tens of thousands of documents, enough to piece together the entire scheme.
A mortgage has two parts: the promissory note (the IOU from the borrower to the lender) and the mortgage, which creates the lien on the home in case of default. During the housing bubble, banks bought loans from originators, and then (in a process known as securitization) enacted a series of transactions that would eventually pool thousands of mortgages into bonds, sold all over the world to public pension funds, state and municipal governments and other investors. A trustee would pool the loans and sell the securities to investors, and the investors would get an annual percentage yield on their money.  MORE

Posted by Melinda Pillsbury-Foster at 1:32 PM