The Last Step for War – Keeping Saddam Hussein in Iraq 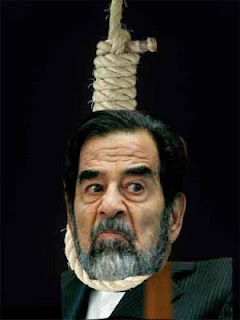 Why did Saddam Hussein stay in Iraq? There was every motive to leave. He had seen what happened to leaders who attempt to withstand the corporate interests who are looking for an opportunity to loot a country. While John Perkins had not yet written his book, “Confessions of an Economic Hitman,” he knew the score. He could never withstand an invasion by America. He was not suicidal. He had gotten his start as a hire for the CIA and knew what was poised to happen to him, his family, and his nation.

Cast you mind back to those dark days when we were reeling, the images of towers falling from the sky still engraved on our retinas.

Voices were being raised in objection and silenced.

Look over the time line appearing in Mother Jones, September/October 2006 Issue, titled, “Lie by Lie: A Timeline of How We Got Into Iraq,” by Jonathan Stein and Tim Dickinson.
The war against Iraq began June, 2002, with intense bombing. The U. S. military flew 21,736 sorties and attacked 349 targets between June and the official start of the war in 2003.

Bombing is an act of war.

Rove, Cheney, and the Bush Administration, thwarted with the lack of evidence Saddam had nothing to do with 9/11, falsified evidence of Weapons of Mass Destruction. Reports by debunked sources, specifically Curveball, who is known to be unreliable, are treated as trusted sources.

Every conceivable action is taken to suppress the truth and allow the spin campaign, which began as the White House Iraq Group in August of 2002. This included, Rove, Libby, Rice, as well as Karen Hughes and Mary Matalin.

Cheney personally lied, over and over again, to get Congress to acquiesce, to the media and to the public.

The Administration knew they were manufacturing, spinning, to start a war even while Saddam Hussein was offering to allow UN inspectors in (September 18, 2002) and all reports from returning CIA moles affirmed Saddam had abandoned WMD programs. This information is buried in the CIA bureaucracy.

Anything which disagrees with the drive for war in Iraq is suppressed. Lies, 'sexing up,' reports, are reported publicly.

The use of torture has been rationalized and is being used, despite the Geneva Conventions and Protocols on Human Rights and the Conduct of Hostilities.

The Bush Administration is, collectively, behaving like a bunch of chimps working themselves up to violence, to a person, ignoring their actions are, effectively, converting a nation dedicated to individual freedom and human rights into its antitheses.

One September 26, 2002, during a Rose Garden speech, Bush said, ""The Iraqi regime possesses biological and chemical weapons."" The same day, during a speech in Houston Bush said of Saddam, "After all, this is a guy who tried to kill my dad."

Two days later Bush said in his address to nation: "'The Iraqi regime possesses biological and chemical weapons, is rebuilding the facilities to make more, and, according to the British government, could launch a biological or chemical attack in as little as 45 minutes after the order is given."'

In an ominous foreshadowing of what was to come, Bush delivered a speech on October 7, 2002, in which he stated, "'Facing clear evidence of peril, we cannot wait for the final proof—the smoking gun—that could come in the form of a mushroom cloud."' Today we know effective deployment of drone technology was far beyond anything available to anyone – but the U. S.

Battered and intimidated, on October 11th, “Congress—including all serious Democratic contenders—votes to grant Bush power to go to war.”  On November 5th, control of the Congress moved to the GOP. The campaign of lies, using fear and their love of country, had allowed the ongoing theft of elections by Karl Rove to work again.

Saddam Hussein would have known of every comment and been forced to consider his options. His country was being hammered by bombs, his plans to sell oil to partners other than the U. S. were, therefore stymied. It would be a compelling reality for him to consider an exit strategy at this point.

Only one event could now stop the War in Iraq from going forward, for Saddam to offer to leave Iraq. Given his options, this would have been the only safe thing for him to do. All previous events, now clear to us and documented, show he was being set up. His very life, and those of his family members, were on the line.

Saddam made just this offer in November of 2002.

Clearly, the Bush Administration would ignore this request. Saddam, therefore, made contact with the previous administration. The Clintons, through their associate Sidney Blumenthal, former White House and his son, Max, pulled out all of the stops to ensure the one event which could derail plans to invade Iraq.

The offer was made by Saddam, via email, through Max Blumenthal, this forwarded on to his father. With the Clintons assurances, they were able to persuade Saddam to stay in Iraq.
Sidney was then unaware his computer had been hacked. A keylogger was sending his emails to another party, who reported this to the CIA. The same party then found themselves subject to a barrage of harassment and threats beginning as the Iraqi Invasion began.

How much was it worth to keep Saddam in place? Could pay-offs have been made to ensure the cooperation, and silence, of the Clintons and Blumenthals?

According to a Los Angeles Times article, titled, “Clintons disclose wealth,”published April 05, 2008| written by Peter Nicholas, Robin Fields and Dan Morain,when the Clinton's left the White House, “in January 2001, they (The Clintons) had amassed more than $11 million in legal debts, incurred during investigations into the Whitewater controversy and the former president's affair with Monica S. Lewinsky.” Within the next year or so their, “returns show that the family's annual income shot up after her husband left the White House, rising from $358,000 in 2000 to $16 million a year later, when Bill Clinton listed his occupation as "speaking and writing." “

In 1997, Blumenthal had filed a $30 million libel lawsuit against Internet blogger Matt Drudge and AOL, Drudge's employer, because of a false claim Drudge made of spousal abuse.
In fact, the article was the brain child of Drudge and John Fund, then still on the Editorial Board of the Wall Street Journal. Drudge had attributed the story to "top GOP sources." Drudge later retracted the story.

Drudge publicly apologized to the Blumenthals and the lawsuit was dropped with Blumenthal, who, ironically, settled by making a small payment to Drudge over a missed deposition.

In his book, The Clinton Wars, Blumenthal claimed he was forced to settle because he could no longer financially afford the suit, which had proven to be expensive. Drudge, who was guilty, had managed to receive support from both solicitations, claiming he was being harassed, and likely from operatives working for the NeoCons.

Saddam's actions, in offering to leave, were entirely predictable.

Soliciting support from the Clintons, by the Bush White House, resulted a cooperative relationship between the former and then president which was mutually beneficial, ending any threat from the Clintons and sealing them into a role within the power elite, which they continue to enjoy today.

Posted by Melinda Pillsbury-Foster at 1:20 PM