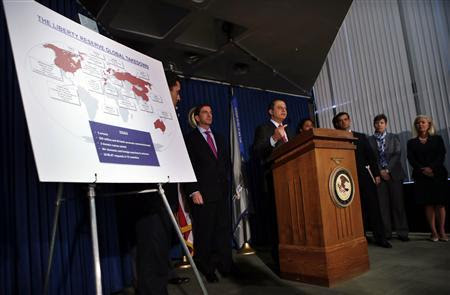 Preet Bharara, United States Attorney for the Southern District of New York, describes charges against Costa Rica-based Liberty Reserve, one of the worlds largest digital currency companies and seven of it's principals and employees for allegedly running a $6 billion money laundering scheme at a news conference in New York, May 28, 2013.
Credit: Reuters/Mike Segar

(Reuters) - U.S. prosecutors have filed an indictment against the operators of digital currency exchange Liberty Reserve, accusing the Costa Rica-based company of helping criminals around the world launder more than $6 billion in illicit funds linked to everything from child pornography to software for hacking into banks.
The indictment unsealed on Tuesday said Liberty Reserve had more than a million users worldwide, including at least 200,000 in the United States, and virtually all of its business was related to suspected criminal activity.
U.S. Attorney Preet Bharara called the case perhaps "the largest international money laundering case ever brought by the United States."


"Liberty Reserve has emerged as one of the principal means by which cyber-criminals around the world distribute, store and launder the proceeds of their illegal activity," according to the indictment filed in U.S. District Court for the Southern District of New York.  MORE

Posted by Melinda Pillsbury-Foster at 3:03 AM