"They Throw Kids on the Ground, Put Guns to Their Heads" -- The Horrors Unleashed by Police Militarization


SWAT teams burst through doors armed to the teeth, terrifying (and killing) children. How did we get here? 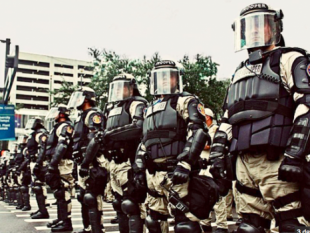 The following is an excerpt from RISE OF THE WARRIOR COP: The Militarization of America's Police Forces by Radley Balko.  Reprinted with permission from PublicAffairs Books.  Amazon Link
Betty Taylor still remembers the night it all hit her.
As a child, Taylor had always been taught that police officers were the good guys. She learned to respect law enforcement, as she puts it, “all the time, all the way.” She went on to become a cop because she wanted to help people, and that’s what cops did. She wanted to fight sexual assault, particularly predators who take advantage of children. To go into law enforcement—to become one of the good guys—seemed like the best way to accomplish that. By the late 1990s, she’d risen to the rank of detective in the sheriff’s department of Lincoln County, Missouri—a sparsely populated farming community about an hour northwest of St. Louis. She eventually started a sex crimes unit within the department. But it was a small department with a tight budget. When she couldn’t get the money she needed, Taylor was forced to give speeches and write her own proposals to keep her program operating.
What troubled her was that while the sex crimes unit had to find funding on its own, the SWAT team was always flush with cash. “The SWAT team, the drug guys, they always had money,” Taylor says. “There were always state and federal grants for drug raids. There was always funding through asset forfeiture.” Taylor never quite understood that disparity. “When you think about the collateral effects of a sex crime, of how it can affect an entire family, an entire community, it just didn’t make sense. The drug users weren’t really harming anyone but themselves. Even the dealers, I found much of the time they were just people with little money, just trying to get by.”
The SWAT team eventually co-opted her as a member. As the only woman in the department, she was asked to go along on drug raids in the event there were any children inside. “The perimeter team would go in first. They’d throw all of the adults on the floor until they had secured the building. Sometimes the kids too. Then they’d put the kids in a room by themselves, and the search team would go in. They’d come to me, point to where the kids were, and say, ‘You deal with them.’” Taylor would then stay with the children until family services arrived, at which point they’d be placed with a relative.
Taylor’s moment of clarity came during a raid on an autumn evening in November 2000. Narcotics investigators had made a controlled drug buy a few hours earlier and were laying plans to raid the suspect’s home. “The drug buy was in town, not at the home,” Taylor says. “But they’d always raid the house anyway. They could never just arrest the guy on the street. They always had to kick down doors.” With just three hours between the drug buy and the raid, the police hadn’t done much surveillance at all. The SWAT team would often avoid raiding a house if they knew there were children inside, but Taylor was troubled by how little effort they put into seeking out that sort of information. “Three hours is nowhere near enough time to investigate your suspect, to find out who might be inside the house. It just isn’t enough time for you to know the range of things that could happen.”
That afternoon the police had bought drugs from the stepfather of two children, ages eight and six. Both were in the house at the time of the raid. The stepfather wasn’t. MORE
Posted by Melinda Pillsbury-Foster at 8:01 AM