As they try to cope with the trauma of losing so many of their neighbors, friends and family members, residents of Lac-Mégantic have been forced to grapple with another ordeal: fear that the oil train accident may have done long-term damage to the area’s environment.

Lac-Mégantic is situated on a gentle slope that follows the contours of an old streambed and eventually drains into the lake, for which the town is named, and the Chaudière River. On a map of Lac-Mégantic Rejean Campagna shows me where the streambed was located before the area – once a swamp – was filled in to build the town. When the oil spilled it basically followed that drainage path, Campagna says. 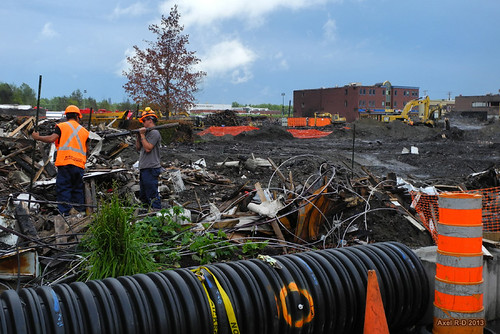 Because so much of the oil burned it has been difficult to determine the precise quantity that ended up in the river. According to Quebec’s Ministry of Sustainable Development, Environment, and Parks, more than 1.5 million gallons of oil were released on the morning of July 6. At least 26,000 gallons ended up in the Chaudière River, which eventually flows into the St. Lawrence River near Quebec City. Drinking water bans were issued for towns located more than 50 miles downstream. (Lac-Mégantic draws its water from municipal wells beneath a layer of clay and there is no sign that they’ve been contaminated.) The environment ministry says that more than 11,400 gallons of oily water were removed from the river alone; another 12.98 million gallons of oily water were taken out of the sewers, lake, and surrounding land. In addition, between 20,000 and 29,500 gallons of soil were contaminated.  MORE
Posted by Melinda Pillsbury-Foster at 10:11 PM