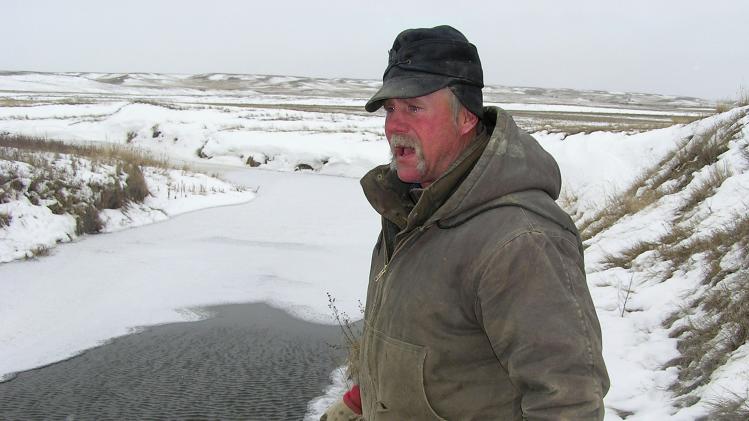 FILE - In this Jan. 12, 2007, file photo Ned Hermanson inspects Charbonneau Creek near Alexander, N.D., where a disposal pipeline owned by an Oklahoma oil company ruptured spilling more than 1 million gallons of saltwater into the creek. It's been called the worst environmental disaster in North Dakota's history and nearly eight years later cleanup continues with no end in sight. (AP Photo/James MacPherson)

BISMARCK, N.D. (AP) -- It's been called the worst environmental disaster in state history: A broken pipeline belched more than a million gallons of saltwater into a northwestern North Dakota creek, aquifer and pond. Yet nearly eight years later, cleanup efforts are ongoing — with no end in sight, state health officials say.

The ruptured pipeline allowed briny water to spew unnoticed for weeks into a tributary of the Yellowstone River near Alexander and caused a massive die-off of fish, turtles and plants. Briny water is an unwanted byproduct of oil and natural gas drilling that is 20 times saltier than ocean water.

Since the spill, critics say, the state hasn't gone far enough to ensure that such catastrophic spills are avoided.