(NaturalNews) If you have stomach problems or gastrointestinal problems, a new study led by Dr. Judy Carman may help explain why: pigs fed a diet of genetically engineered soy and corn showed a 267% increase in severe stomach inflammation compared to those fed non-GMO diets. In males, the difference was even more pronounced: a 400% increase. (For the record, most autistic children are males, and nearly all of them have severe intestinal inflammation.)

The study was conducted on 168 young pigs on an authentic farm environment and was carried out over a 23-week period by eight researchers across Australia and the USA. The lead researcher, Dr. Judy Carman, is from the Institute of Health and Environmental Research in Kensington Park, Australia. The study has now been published in the Journal of Organic Systems, a peer-reviewed science journal.

The study is the first to show what appears to be a direct connection between the ingestion of GMO animal feed and measurable damage to the stomachs of those animals. Tests also showed abnormally high uterine weights of animals fed the GMO diets, raising further questions about the possibility of GMOs causing reproductive organ damage.

Proponents of corporate-dominated GMO plant science quickly attacked the study, announcing that in their own minds, there is no such thing as any evidence linking GMOs to biological harm in any animals whatsoever. And they are determined to continue to believe that, even if it means selectively ignoring the increasingly profound and undeniable tidal wave of scientific studies that repeatedly show GMOs to be linked with severe organ damage, cancer tumors and premature death.

The study was jointly announced by GM Watch and Sustainable Pulse.

Lead author of the study Dr. Judy Carman stated, "We found these adverse effects when we fed the animals a mixture of crops containing three GM genes and the GM proteins that these genes produce. Yet no food regulator anywhere in the world requires a safety assessment for the possible toxic effects of mixtures. Our results provide clear evidence that regulators need to safety assess GM crops containing mixtures of GM genes, regardless of whether those genes occur in the one GM plant or in a mixture of GM plants eaten in the same meal, even if regulators have already assessed GM plants containing single GM genes in the mixture."

The following photo shows one of the pig intestines fed a non-GMO diet vs. a pig intestine fed a GMO diet. As you can see from the photo, the pig fed the GMO diet suffered severe inflammation of the stomach: 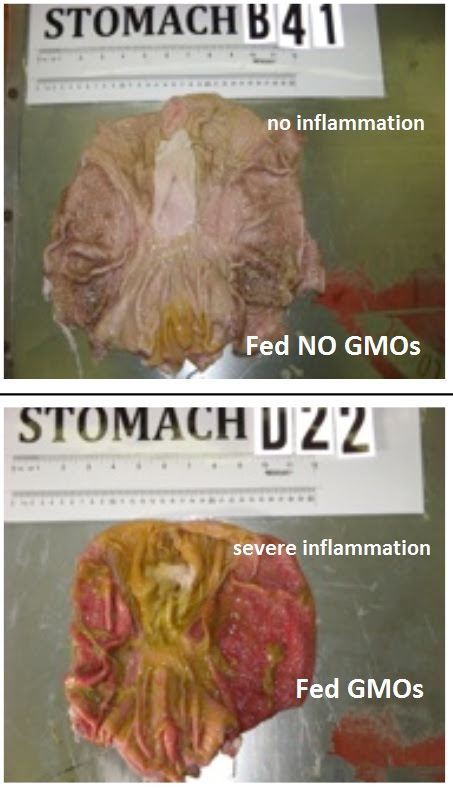 The study adds to the weight of scientific evidence from others studies which show that rats fed a diet of GMOs grow horrifying cancer tumors and suffer premature death.

That study was also criticized by corporate GMO trolls who argued that scientists should not show pictures of rats with large cancer tumors caused by GMOs because the pictures scare consumers into being afraid of GMOs.

Here are some of the pictures they don't want you to see, taken right from the public announcement of the study: 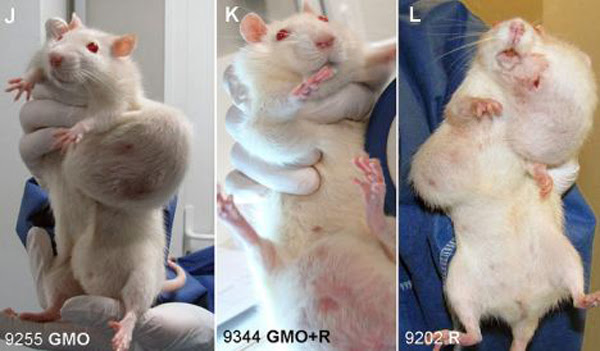 
Why weren't these studies done before GMOs were unleashed into the global food supply?

The GMO biotech industry was able to escape any meaningful regulation of GMOs in the United States by (ridiculously) claiming GMOs were substantially no different from non-genetically engineered crops. "They're all the same!" we were told. And the USDA bought it.

So how did Monsanto patent its GM corn, then? You're not supposed to be able to patent something unless it's uniquely different. Thus, the very fact that Monsanto has acquired patents on its GMO crop varieties is proof that the company itself believes its seeds are different.

And what's different about Monsanto's GM corn? It produces a deadly insecticide grown right into every kernel. That insecticide, of course, is what kills insects that try to eat the crop. And how does it kill those insects? It fatally damages their digestive systems. That same insecticide stays inside the corn even as the crop is turned into animal feed... or corn chip snacks... or flaked corn breakfast cereal.


GMOs are unfit for human consumption

This pig stomach inflammation study suddenly provides yet more credible evidence that GMOs are unfit for human consumption and may be causing severe damage to the digestive systems of both humans and mammals.

Naturally, the GMO industry and all its paid online trolls, on-the-take "scientists" and multi-million dollar P.R. machine will try to viciously attack this study from every angle. They absolutely hate real science when that science calls into question their poisonous, deadly seeds and genetic pollution.

That's why you won't read this news anywhere in the mainstream media -- the same media that utterly discredited itself a few weeks ago when it pretended the hugely successful global March Against Monsanto never even took place.

NOTE TO THE SELLOUT CORPORATE MEDIA: You have zero credibility remaining. Virtually no one believes what you print. Everyone knows you have sold out your editorial agenda to Big Pharma, Monsanto, weapons manufacturers and the surveillance state. The reason why alternative media like GM Watch and Natural News is rising while your own numbers keep plummeting is because we print the real news that really matters on liberty, food freedom, farm freedom, health freedom and self-reliance. Maybe if you stopped intentionally lying to your readers on a daily basis while censoring important news on grassroots liberty, you might see some readers return to your publication...

Learn more:
Explanation of the key findings of the Judy Carman study:
http://gmojudycarman.org/wp-content/uploads/2013/06/Clear-English-exp...

Summary of the evidence against GMOs:
www.GMOevidence.com

More details on the Seralini study on GMOs and rats:
www.GMOseralini.org