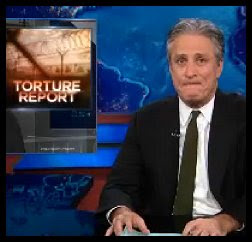 Among the many items which would have otherwise been top stories --- some even meriting wall-to-wall cable news channel coverage --- during last week's Worst News Week Ever™, was the release of a landmark bi-partisan report on the use of torture by the U.S. following 9/11.
The Constitution Project's "Task Force on Detainee Treatment" is described as "an independent, bipartisan, blue-ribbon panel charged with examining the federal government’s policies and actions related to the capture, detention and treatment of suspected terrorists during the Clinton, Bush and Obama administrations."
It is headed up by former Congressmen Asa Hutchinson (R) and James R. Jones (D). Hutchinson also served as a top official in the George W. Bush Administration.
"In many respects," the introduction to the report explains, "this Task Force report is the examination of the treatment of suspected terrorists that official Washington has been reluctant to conduct."
As the New York Times' Scott Shane detailed in his barely noticed coverage last Tuesday (the day after the Boston Marathon bombing and the day before the deadly explosion at the West, TX fertilizer plant)...
A nonpartisan, independent review of interrogation and detention programs in the years after the Sept. 11, 2001, terrorist attacks concludes that "it is indisputable that the United States engaged in the practice of torture" and that the nation's highest officials bore ultimate responsibility for it. The sweeping, 577-page report says that while brutality has occurred in every American war, there never before had been "the kind of considered and detailed discussions that occurred after 9/11 directly involving a president and his top advisers on the wisdom, propriety and legality of inflicting pain and torment on some detainees in our custody."
...
The use of torture, the report concludes, has "no justification" and "damaged the standing of our nation, reduced our capacity to convey moral censure when necessary and potentially increased the danger to U.S. military personnel taken captive." The task force found "no firm or persuasive evidence" that these interrogation methods produced valuable information that could not have been obtained by other means.
...
Mr. Hutchinson, who served in the Bush administration as chief of the Drug Enforcement Administration and under secretary of the Department of Homeland Security, said he "took convincing" on the torture issue. But after the panel's nearly two years of research, he said he had no doubts about what the United States did.
"This has not been an easy inquiry for me, because I know many of the players," Mr. Hutchinson said in an interview.
...
"I had not recognized the depths of torture in some cases," Mr. Jones said. "We lost our compass."
While the Constitution Project report covers mainly the Bush years, it is critical of some Obama administration policies, especially what it calls excessive secrecy. It says that keeping the details of rendition and torture from the public "cannot continue to be justified on the basis of national security" and urges the administration to stop citing state secrets to block lawsuits by former detainees.
We will reserve the option of returning to this matter in the near future in more detail. But, as we're still recovering, as you may be as well, from a horrible news hangover following last week's Week From Hell (during which Andy Daly tweeted accurately: "When an Elvis impersonator trying to kill the President is the least interesting news story of the week, you know some shit went down") we are going to go easy on this matter for the moment, and defer instead to the The Daily Show's coverage of this disturbing report...just to help take the edge off things for now. You're welcome.
Posted by Melinda Pillsbury-Foster at 11:24 AM