The Marathon Bombing: What The Media Didn’t Warn You About 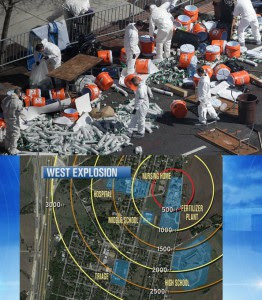 Boston, and the other big explosion—in West, Texas
During a meeting on Tuesday morning, less than 24 hours after the bombings at the Boston Marathon, a well-meaning person asked me whether I thought we could assume that the usual suspects were behind the mayhem, or whether there was “more to it.” When I explained doubts about the conventional rush to judgment—and where those doubts came from—I was told I was on dangerous ground. This person, it seemed, was quite steadfast that the culprits must have come from certain well-advertised enemies of America, and didn’t want to even consider anything more complex.
We’re the products of our environment, and, in many respects, the media defines that environment.
Monday’s bombing at the Boston Marathon provides a perfect example of the defects of conventional news reportage—and proof that we urgently need something better. We got “scoops”, “experts”, “updates,” and post-tragedy Kumbaya, but at the end of those days of saturation coverage, we were none the wiser. It’s like what studies find about television news: the more you watch, the worse you perform on knowledge exams.
We ought to care more about the narrative we’re getting, about the texture of what saturates us. The way in which a story is handled shapes our emotions and perceptions, determines priorities, and influences seemingly unrelated outcomes that affect us in profound ways, sometimes transforming our society.
Worry, But Not Too Much
With the bombing story, emotions ran high, of course. The media understand this, and while they talk in reassuring tones and routinely issue sober disclaimers, almost everything they do plays to our irrational sides.
Two elements predominate: danger and reassurance. Some of the talking heads are there to warn about danger, others to reassure us. Some do both. We wouldn’t want just one or the other—it would be too hard to take. But together, they represent, psychologically, an ineluctable offering.
As long as they appear in tandem, we will sit, immobilized, and let the networks’ pronouncements wash over us. We become so anaesthetized to critical thinking that we fail to consider whether we are getting any information of use at all.
Experts
On CBS, a purported expert declared, “It could be Al Qaeda, it could be someone influenced by Al Qaeda, or it could be a domestic lone wolf” –when in fact it could have been anything at all, including a whole bunch of domestic non-Al Qaeda non-lone wolves. This man provided nothing useful in any way beyond conventional stereotypes. What he did do was define the permissible bounds of public conjecture.
Scoops
Speculation and its close cousin, “analysis,” predominate only in the absence of the hottest commodity, “scoops.” News personnel are pressed into service to gather any sort of exclusive tidbits that might put their employer just slightly ahead of the competition. Temporarily, of course, and in the same direction. So, while CBS expert was strongly implying that we might suspect foreigners, CNN went it one better.
Correspondent John King reported:

I want to be very careful about this because people get very sensitive when you say these things. I was told by one of these sources, who is a law enforcement official, that this was a dark-skinned male. The official used some other words, I’m not going to repeat them until we get more information because of the sensitivities. There are some people that will take offense even at saying that.
Well, no wonder. That “dark-skinned” detail turned out to be a false report.
Repetition
In the absence of “scoops” or a fresh trove of “experts,” TV news outfits resort to repetition. Thus, after several minutes, you’re on a loop. They don’t tell you that you are, and because we hear a live anchor slightly rewording things, we hang on, in the vain hope we are about to learn something new.
Another thing that keeps us hooked is the promise of being re-traumatized in as many ways as possible. Show us that bomb going off again, please. Let’s see new pictures of the killed and injured in happier times. Let’s see closeups of gnarled detritus, and, on occasion with disclaimers that young children ought not watch, at least a hint of blood and gore. Let us “empathize,” and feel good about ourselves for doing so.
Kumbaya
How many times do we have to hear the same—literally, almost exactly the same—stories about “our hearts go out to the families”, about how “neighbors displayed yellow ribbons, lit candles and displayed American flags.” A liberal news site sent out an email saying “we are all in this together.”
To what end all this empathy? It may reassure us that humanity continues to shine through at tough times, but don’t we already know that?
Some might say that stoking a “show of unity” is a principal responsibility of the American media. But is that really the purpose of journalism?
The definition of journalism I find most useful is, simply stated, the production and dissemination of news. And what, exactly, is “news”? Here’s one definition from theOxford English Dictionary:

Posted by Melinda Pillsbury-Foster at 7:03 AM