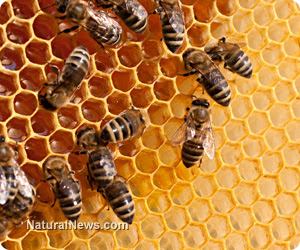 (NaturalNews) A class of insecticide chemicals commonly applied to rapeseed, also known as canola here in the U.S., as well as sugar beets, corn, and various other crops is killing off bee populations across the globe, and a prominent environmental watchdog group is now demanding that these insecticides be immediately pulled from the market. As reported by the U.K.'s Daily Mail, a report issued by the U.K.'s Environmental Audit Committee (EAC) confirms that neonicotinoid insecticides are to blame for mass bee die-offs.

The declaration by this prominent government advisory group comes following the release of data out of the E.U. showing that neonicotinoids contain compounds that interfere with bees' central nervous systems, and thus cause them to become confused while pollinating. Eventually, bees affected by these chemicals lose their ability to navigate back to the hive, forgetting where they are and how to get home, which results in them starving and dying en masse.

Back in January, the European Food Safety Authority (EFSA) determined that neonicotinoids, which have been in use since the early 1990s, are directly responsible for triggering an epidemic of Colony Collapse Disorder (CCD) all around the world. The agency went on to express opposition to the further use of neonicotinoid insecticides, particularly with regards to plants that are attractive to bees. But the European Commission was ultimately unable to garner enough votes to successfully implement a two-year ban on the chemicals, which has prompted EAC to issue its own call for a ban.

"If farmers had to pollinate fruit and vegetables without the help of insects, it would cost hundreds of millions of pounds and we would all be stung by rising food prices," says Joan Walley MP, chair of EAC, referring to the devastating losses that will occur in the absence of pollinating bees. "Defra (Department for the Environment Food and Rural Affairs) Ministers have refused to back EU efforts to protect pollinators and can't even come up with a convincing plan to encourage bee-friendly farming in the U.K."

According to earlier reports, the European Commission was roadblocked in its attempt to protect bee populations by both the U.K. and Germany, which at the last minute failed to vote in favor of a two-year moratorium. The winners in the proposal's defeat, of course, are chemical companies like Syngenta and Bayer CropScience, both of which have a vested interest in neonicotinoids. The losers are not only bees, but the global population at large, which will suffer from crop failures and eventually starvation.

"Britain and Germany have caved in to the industry lobby and refused to ban bee-killing pesticides," Iain Keith from the non-profit environmental group Avaaz is quoted as saying by the U.K.'s Guardian. "[The] vote flies in the face of science and public opinion and maintains the disastrous chemical armageddon on bees, which are critical for the future of our food."

Sources for this article include:

Learn more: http://www.naturalnews.com/040088_bee_population_neonicotinoid_colony_collapse.html#ixzz2RaeoJgtA
Posted by Melinda Pillsbury-Foster at 10:10 AM