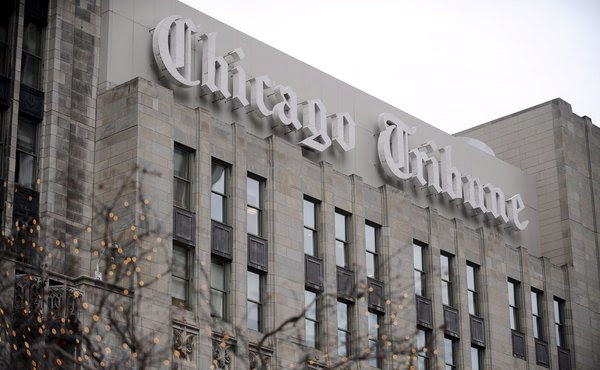 Tannen Maury/European Pressphoto Agency
Tribune’s newspapers, including The Chicago Tribune, have caught the interest of a number of suitors.

Three years ago, Charles and David Koch, the billionaire industrialists and supporters of libertarian causes, held a seminar of like-minded, wealthy political donors at the St. Regis Resort in Aspen, Colo. They laid out a three-pronged, 10-year strategy to shift the country toward a smaller government with less regulation and taxes.
Enlarge This Image

The Los Angeles Times is the fourth-largest paper in the country.

Readers shared their thoughts on this article.

The first two pieces of the strategy — educating grass-roots activists and influencing politics — were not surprising, given the money they have given to policy institutes and political action groups. But the third one was: media.
Other than financing a few fringe libertarian publications, the Kochs have mostly avoided media investments. Now, Koch Industries, the sprawling private company of which Charles G. Koch serves as chairman and chief executive, is exploring a bid to buy the Tribune Company’s eight regional newspapers, including The Los Angeles Times, The Chicago Tribune, The Baltimore Sun, The Orlando Sentinel and The Hartford Courant.
By early May, the Tribune Company is expected to send financial data to serious suitors in what will be among the largest sales of newspapers by circulation in the country. Koch Industries is among those interested, said several people with direct knowledge of the sale who spoke on the condition they not be named. Tribune emerged from bankruptcy on Dec. 31 and has hired JPMorgan Chase and Evercore Partners to sell its print properties.
The papers, valued at roughly $623 million, would be a financially diminutive deal for Koch Industries, the energy and manufacturing conglomerate based in Wichita, Kan., with annual revenue of about $115 billion.
Politically, however, the papers could serve as a broader platform for the Kochs’ laissez-faire ideas. The Los Angeles Times is the fourth-largest paper in the country, and The Tribune is No. 9, and others are in several battleground states, including two of the largest newspapers in Florida, The Orlando Sentinel and The Sun Sentinel in Fort Lauderdale. A deal could include Hoy, the second-largest Spanish-language daily newspaper, which speaks to the pivotal Hispanic demographic.
One person who attended the Aspen seminar who spoke on the condition of anonymity described the strategy as follows: “It was never ‘How do we destroy the other side?’ ”
“It was ‘How do we make sure our voice is being heard?’ ”
Guests at the Aspen seminar included Philip F. Anschutz, the Republican oil mogul who owns the companies that publish The Washington Examiner, The Oklahoman and The Weekly Standard, and the hedge fund executive Paul E. Singer, who sits on the board of the political magazine Commentary. Attendees were asked not to discuss details about the seminar with the press.
A person who has attended other Koch Industries seminars, which have taken place since 2003, says Charles and David Koch have never said they want to take over newspapers or other large media outlets, but they often say “they see the conservative voice as not being well represented.” The Kochs plan to host another conference at the end of the month, in Palm Springs, Calif.
At this early stage, the thinking inside the Tribune Company, the people close to the deal said, is that Koch Industries could prove the most appealing buyer. Others interested, including a group of wealthy Los Angeles residents led by the billionaire Eli Broad and Ronald W. Burkle, both prominent Democratic donors, and Rupert Murdoch’s News Corporation, would prefer to buy only The Los Angeles Times.
The Tribune Company has signaled it prefers to sell all eight papers and their back-office operations as a bundle. (Tribune, a $7 billion media company that also owns 23 television stations, could also decide to keep the papers if they do not attract a high enough offer.)
Koch Industries is one of the largest sponsors of libertarian causes — including the financing of policy groups like the Cato Institute in Washington and the formation of Americans for Prosperity, the political action group that helped galvanize Tea Party organizations and their causes. The company has said it has no direct link to the Tea Party.
This month a Koch representative contacted Eddy W. Hartenstein, publisher and chief executive of The Los Angeles Times, to discuss a bid, according to a person briefed on the conversation who spoke on the condition of anonymity because the conversation was private. Mr. Hartenstein declined to comment.
Koch Industries recently brought on Angela Redding, a consultant based in Salt Lake City, to analyze the media environment and assess opportunities. Ms. Redding, who previously worked at the Charles G. Koch Charitable Foundation, did not respond to requests for comment.
Next Page »
Posted by Melinda Pillsbury-Foster at 7:31 PM