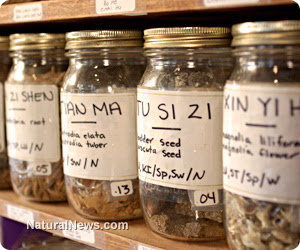 (NaturalNews) A bird flu pandemic has been sparked in China, where 60 people have so far been infected and 13 have died from various new strains of bird flu (including H7N9). Across China and Taiwan, people are in a panic over the spread of bird flu, and the media there is reporting widespread concern that this may be the beginning of the next global pandemic.

A Chinese Air Force General has publicly announced the bird flu is a "bio bomb" weapon launched by the USA, but you won't find that reported in the mainstream media. In fact, the fake media is hardly reporting on this bird flu outbreak at all -- and that's because there is no vaccine to hype yet.

Once a bird flu vaccine is available that claims to target the new strains, all the scare tactics will be unleashed by the CDC, CNN, MSNBC and other usual suspects.

So far, those infected with these bird flu strains have all had contact with birds (poultry). The virus hasn't yet achieved a mutation that would allow it to be transmitted via human-to-human transmission.

But scientists believe that day is not far off. A study led by Masato Tashiro of the Influenza Virus Research Center, National Institute of Infectious Diseases, and Yoshihiro Kawaoka of the University of Wisconsin-Madison and the University of Tokyo concludes the new bird flu strain is "evolving to adapt to human cells, raising concern about its potential to spark a new global flu pandemic."

"The human isolates, but not the avian and environmental ones, have a protein mutation that allows for efficient growth in human cells and that also allows them to grow at a temperature that corresponds to the upper respiratory tract of humans, which is lower than you find in birds."

Meanwhile, the FDA continues to do everything in its power to maximize the death toll if such a pandemic is unleashed. This is a form of "vaccine terror" that attempts to achieve maximum casualties in order to scare everybody into buying in to the vaccine hoax.

The FDA's strategy for this began in 2004 with the banning of Ma Huang (ephedra), a powerful Chinese Medicine herb that's part of a little-known bird flu defense formula called, "Minor Blue Green Dragon."

On November 23, 2004, the FDA unleashed an assault on all dietary supplements containing Ma Huang (ephedra), calling it "dangerous at any dose." This was a complete hoax, of course, given that the FDA routinely allows super deadly pharmaceuticals to remain on the market (Vioxx) even when they kill 50,000 or more Americans. Ma Huang has been used in Chinese Medicine for literally thousands of years with no reports of toxicity.

Because of this banning of Ma Huang by the FDA, ephedra is no longer available in any Chinese Medicine formulas sold throughout the United States. While alternatives have been attempted, none have proven nearly as effective because the primary purpose of Ma Huang in these formulations is to open the pores and allow sweating to occur as part of the body's process for eliminating the bird flu virus.

There are, however, ways to legally acquire Ma Huang through back channels (see below)...

Here's the formula for making Minor Blue Green Dragon, a formula with over 2,000 years of epidemiological evidence behind its efficacy and safety. It is this formula that helped save large regions of China from ancient pandemics that threatened the nation.

This formula is offered as-is, without warranty, under the First Amendment of the United States Constitution, and with the understanding that you will seek the help of a qualified Chinese Medicine practitioner before attempting to acquire, manufacture or consume this remedy. Both English and Chinese names are provided:

This formula is contraindicated if the patient is already sweating. It is typically used for a patient suffering from high fever, coughing and loss of appetite.

How to acquire Ma Huang despite FDA prohibition attempts

Each of these herbs can still be purchased in bulk by visiting bulk herbal sellers located in your nearest China Town. Be sure to tell them you are purchasing these herbs as a "food" for making "tea." Do not state you are using them as medicine, or they may not sell them to you.

In addition, you can also purchase Ma Huang and other herbs directly from herbal suppliers in Taiwan. I'm not recommending a list of suppliers because we haven't yet had the time to sort through them all, but the "Sun-Ten" brand is quite reputable and offers exceptional quality control. (They do not sell direct to consumers. You will need to find a distributor...)

Remember: You may be able to find so-called "Minor Blue Green Dragon" formulas for sale in the USA, but they will lack Ma Huang, the key ingredient. Check the labels to see for yourself. If you want a truly effective combination formula, you'll have to make it yourself thanks to the FDA's attempts to make sure people have no defenses against bird flu (other than vaccines).

For the record, Ma Huang (ephedra) is only dangerous if taken by stupid people who eat it by the bottle, in isolation, in a desperate attempt to lose weight. Nowhere in Chinese Medicine is Ma Huang ever given in isolation. The FDA does not understand the idea of "synergy" in herbal medicines and so completely misunderstands Traditional Chinese Medicine (TCM) and how its chemical constituents work in concert to nullify any risk of toxicity.

Learn more: http://www.naturalnews.com/039911_bird_flu_secret_formulas_Minor_Blue_Green_Dragon.html#ixzz2QXV6ugwE
Posted by Melinda Pillsbury-Foster at 6:44 AM