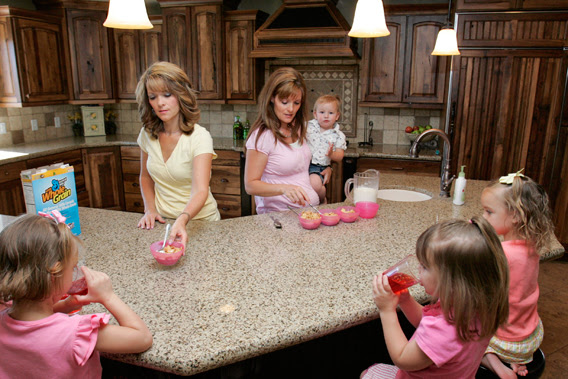 Sister-wives Valerie, left, and Vicki serve breakfast to their children in their polygamous house in Herriman, Utah, in this file photo from May 30, 2007. Polygamy, once hidden in the shadows of Utah and Arizona, is breaking into the open as fundamentalist Mormons push to decriminalize it on religious grounds, while at the same time stamping out abuses such as forced marriages of underage brides. Photo by Kamil Krzaczynski/Reuters

Recently, Tony Perkins of the Family Research Council reintroduced a tired refrain: Legalized gay marriage could lead to other legal forms of marriage disaster, such as polygamy. Rick Santorum, Bill O’Reilly, and other social conservatives have made similar claims. It’s hardly a new prediction—we’ve been hearing it for years. Gay marriage is a slippery slope! A gateway drug! If we legalize it, then what’s next? Legalized polygamy?
We can only hope.

You can also listen to an audio version of this piece.

Yes, really. While the Supreme Court and the rest of us are all focused on the human right of marriage equality, let’s not forget that the fight doesn’t end with same-sex marriage. We need to legalize polygamy, too. Legalized polygamy in the United States is the constitutional, feminist, and sex-positive choice. More importantly, it would actually help protect, empower, and strengthen women, children, and families.

For decades, the prevailing logic has been that polygamy hurts women and children. That makes sense, since in contemporary American practice that is often the case. In many Fundamentalist Latter-day Saints  polygamous communities, for example, women and underage girls are forced into polygamous unions against their will. Some boys, who represent the surplus of males, are brutally thrown out of their homes and driven into homelessness and poverty at very young ages. All of these stories are tragic, and the criminals involved should be prosecuted to the fullest extent of the law. (That goes without saying, I hope.)

But legalizing consensual adult polygamy wouldn’t legalize rape or child abuse. In fact, it would make those crimes easier to combat.

Right now, all polygamous families, including the healthy, responsible ones, are driven into hiding (notwithstanding the openly polygamous Brown family on TLC’s Sister Wives, that is). In the resulting isolation, crime and abuse can flourish unimpeded. Children in polygamous communities are taught to fear the police and are not likely to report an abusive neighbor if they suspect their own parents might be caught up in a subsequent criminal investigation. In a United States with legalized polygamy, responsible plural families could emerge from the shadows—making it easier for authorities to zero in on the criminals who remain there.

Many people argue that there is no such thing as a “healthy, responsible” polygamous family, particularly for the children born into one. “Children are harmed because they are often set in perennial rivalry with other children and mothers for the affection and attention of the family patriarch,” argued John Witte Jr. in the Washington Post. “Men with lots of children and wives are spread too thin,” agreed Libby Copeland in Slate. The earnestness of these arguments is touching but idealistic. Men in monogamous marriages can’t be spread too thin? Children in monogamous families don’t rival each other for the attentions of their parents? Two-parent families are not the reality for millions of American children. Divorce, remarriage, surrogate parents, extended relatives, and other diverse family arrangements mean families already come in all sizes—why not recognize that legally?

It’s also hard to argue with the constitutional freedom of religious expression that legalized polygamy would preserve. Most polygamous families are motivated by religious faith, such as fundamentalist Mormonism or Islam, and as long as all parties involved are adults, legally able to sign marriage contracts, there is no constitutional reason why they shouldn’t be able to express that faith in their marriages. Legalized polygamous marriage would also be good for immigrant families, some of whom have legally polygamous marriages in their home countries that get ripped apart during the immigration process. (It’s impossible to estimate exactly how many polygamous families live here, since they live their religious and sexual identities in secret. Academics suggest there are 50,000 to 100,000 people engaged in Muslim polygamy in the U.S., and there are thousands of fundamentalist Mormon polygamist families as well.)

Finally, prohibiting polygamy on “feminist” grounds—that these marriages are inherently degrading to the women involved—is misguided. The case for polygamy is, in fact, a feminist one and shows women the respect we deserve. Here’s the thing: As women, we really can make our own choices. We just might choose things people don’t like. If a woman wants to marry a man, that’s great. If she wants to marry another woman, that’s great too. If she wants to marry a hipster, well—I suppose that’s the price of freedom.

And if she wants to marry a man with three other wives, that’s her damn choice.
Posted by Melinda Pillsbury-Foster at 6:39 AM