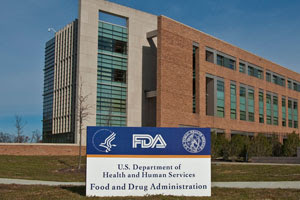 (The Food and Drug Administration)

Last week, ProPublica reported that the Food and Drug Administration allowed dozens of medications to stay on the market, even though the research designed to prove their safety and effectiveness was undermined by "egregious" violations at a major pharmaceutical research laboratory in Houston. New information shows that even after the FDA had cited the lab for falsifying data and other misconduct, the agency issued a brand new approval to a drug tested there.
The FDA has refused to reveal the names of any of the approximately 100 drugs affected by the fraud at the Houston lab of the firm Cetero Research, saying that to do so would reveal confidential commercial information. ProPublica was able to identify five of those drugs, and now we’ve found a sixth. This one was approved after the agency had already cited the Houston lab for misconduct.
The drug is a generic version of Tussionex, which combines a long-acting narcotic cough suppressant with an anti-allergy medication. Manufactured by TrisPharma, the drug has a tongue-twisting chemical name: hydrocodone polistirex/chlorpheniraminepolistirex.
ProPublica discovered that both of the clinical trials used to show that the generic is equivalent to the name brand — a key requirement for FDA approval — were analyzed in May and June 2009 at the Houston lab of the firm Cetero Research. The company, which conducted research for scores of pharmaceutical companies, has acknowledged that chemists at its Houston lab committed research fraud, though it says the misconduct was limited to a handful of employees and that none of their tests have so far proven to be wrong or inaccurate.
Cetero filed for Chapter 11 bankruptcy last year and emerged with a new name, PRACS Institute. PRACS, in turn, filed for bankruptcy earlier this year.
The FDA got wind of problems at Cetero Houston in June 2009 when, prompted by a whistleblower, the company alerted the agency of potential wrongdoing.
On May 3, 2010, three FDA agents came to inspect the lab. The facility’s president turned over eight flatbed carts double-stacked with file boxes and admitted that much of the lab’s work was fraudulent, saying, “You got us,” lead agent Patrick Stone recalled. (The lab’s president declined to comment.)
On May 7, the FDA issued an inspection report that cited data falsification and other laboratory violations at the facility during the time its chemists conducted the tests for the TrisPharma drug.
But five months later, in October 2010, the FDA approved Tris' drug for sale in the United States.
The FDA continued to inspect the Houston lab, and in July 2011, the agency called the lab’s misconduct so “egregious” and pervasive that more than five years of tests conducted at the lab were potentially “unreliable.” The agency asked pharmaceutical companies to repeat or reanalyze any tests conducted there during that time if they had helped win drug approval. The FDA did not pull any drugs off pharmacy shelves, despite the fact that dozens were approved on data the agency now said was questionable.
In April 2012 the FDA relaxed its requirements. The agency announced that studies analyzed at Cetero Houston between March 2008 and August 2009 — the time period in which tests for the TrisPharma drug were conducted — would not need to be redone but instead would require only a "verification of data integrity by an independent third-party audit."
Tris said it hired a consultant to perform the audit and it “came back 100 percent clean," Groner said. "Something could have happened, but in our case, nothing did." He said Tris submitted the audit to the FDA in the second quarter of 2012.
The FDA has reviewed the audit and found it “acceptable,” an agency spokesperson wrote in an email. “Our earlier determination that this product meets FDA standards was upheld.” She declined to add any information or answer more specific questions.
The main point of that audit was to look for red flags that researchers might have cooked the books, said Scott Groner, TrisPharma’s Director of Regulatory Affairs and Compliance. The Cetero researchers ran blood samples through a machine known as a mass spectrometer. By examining the timestamps of these runs, Groner said, the auditors could tell whether or not a rogue researcher would have been able to tamper with the results of the experiment. "If there was some manipulation, there would have to be some down time" for the researcher to fiddle with the samples or the machine in order to produce the desired result, he explained. Auditors, he added, “were looking for many other things. Were [experiments] done late at night, on weekends?"
While the FDA declined to comment on the specifics of the Tris Pharma case, the agency has previously said that it ran a risk assessment and concluded that the chances were low that drugs tested at Cetero Houston were unsafe. The fact that the FDA has since found no problems with drugs tested there “confirmed” that risk assessment, a top FDA official said.
As of last week, the agency said it had completed reviewing 21 out of 53 submissions it had received from pharmaceutical companies that had medications tested at Cetero Houston. It also said a few companies had not yet submitted new data or audits on drugs tested there.
Rob Garver can be reached at rob.garver@propublica.org, and Charles Seife can be reached at cgseife@nasw.org.
Posted by Melinda Pillsbury-Foster at 1:25 PM