As usual, the limits of selective empathy, the rush to blame Muslims, and the exploitation of fear all instantly emerge 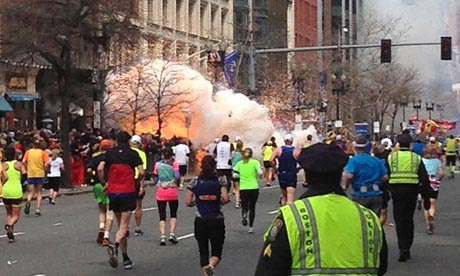 Runners continue to run towards the finish line of the Boston marathon as an explosion erupts near the finish line of the race Photograph: Stringer/REUTERS
There's not much to say about Monday's Boston Marathon attack because there is virtually no known evidence regarding who did it or why. There are, however, several points to be made about some of the widespread reactions to this incident. Much of that reaction is all-too-familiar and quite revealing in important ways:
(1) The widespread compassion for yesterday's victims and the intense anger over the attacks was obviously authentic and thus good to witness. But it was really hard not to find oneself wishing that just a fraction of that compassion and anger be devoted to attacks that the US perpetrates rather than suffers. These are exactly the kinds of horrific, civilian-slaughtering attacks that the US has been bringing to countries in the Muslim world over and over and over again for the last decade, with very little attention paid. My Guardian colleague Gary Younge put this best on Twitter this morning: 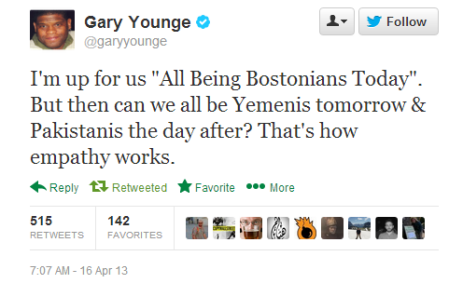 Juan Cole this morning makes a similar point about violence elsewhere. Indeed, just yesterday in Iraq, at least 42 people were killed and more than 250 injured by a series of car bombs, the enduring result of the US invasion and destruction of that country. Somehow the deep compassion and anger felt in the US when it is attacked never translates to understanding the effects of our own aggression against others.
One particularly illustrative example I happened to see yesterday was a re-tweet from Washington Examiner columnist David Freddoso, proclaiming:


Idea of secondary bombs designed to kill the first responders is just sick. How does anyone become that evil?"


I don't disagree with that sentiment. But I'd bet a good amount of money that the person saying it - and the vast majority of other Americans - have no clue that targeting rescuers with "double-tap" attacks is precisely what the US now does with its drone program and other forms of militarism. If most Americans knew their government and military were doing this, would they react the same way as they did to yesterday's Boston attack: "Idea of secondary bombs designed to kill the first responders is just sick. How does anyone become that evil?" That's highly doubtful, and that's the point.
There's nothing wrong per se with paying more attention to tragedy and violence that happens relatively nearby and in familiar places. Whether wrong or not, it's probably human nature, or at least human instinct, to do that, and that happens all over the world. I'm not criticizing that. But one wishes that the empathy for victims and outrage over the ending of innocent human life that instantly arises when the US is targeted by this sort of violence would at least translate into similar concern when the US is perpetrating it, as it so often does (far, far more often than it is targeted by such violence).
Regardless of your views of justification and intent: whatever rage you're feeling toward the perpetrator of this Boston attack, that's the rage in sustained form that people across the world feel toward the US for killing innocent people in their countries. Whatever sadness you feel for yesterday's victims, the same level of sadness is warranted for the innocent people whose lives are ended by American bombs. However profound a loss you recognize the parents and family members of these victims to have suffered, that's the same loss experienced by victims of US violence. It's natural that it won't be felt as intensely when the victims are far away and mostly invisible, but applying these reactions to those acts of US aggression would go a long way toward better understanding what they are and the outcomes they generate.
(2) The rush, one might say the eagerness, to conclude that the attackers were Muslim was palpable and unseemly, even without any real evidence. The New York Post quickly claimed that the prime suspect was a Saudi national (while also inaccurately reporting that 12 people had been confirmed dead). The Post's insinuation of responsibility was also suggested on CNN by Former Bush Homeland Security Adviser Fran Townsend ("We know that there is one Saudi national who was wounded in the leg who is being spoken to"). Former Democratic Rep. Jane Harman went on CNN to grossly speculate that Muslim groups were behind the attack. Anti-Muslim bigots like Pam Geller predictably announced that this was "Jihad in America". Expressions of hatred for Muslims, and a desire to do violence, were then spewing forth all over Twitter (some particularly unscrupulous partisan Democrat types were identically suggesting with zero evidence that the attackers were right-wing extremists).

MORE
Posted by Melinda Pillsbury-Foster at 3:39 AM